Yesterday, the market staged an impressive rally after ADP reported its strongest private sector job growth – ever. Analysts were expecting 100,000 new jobs and 300,000 were added in December. Private sector employment is the key to a sustained economic recovery.

Analysts scrambled to revise their expectations for Friday’s Unemployment Report. Most have bumped their projections up by 40,000 and anything less than 180,000 will be viewed negatively. Initial jobless claims have been dropping consistently and the four-week moving average is declining. This bodes well for tomorrow’s number. Seasonal adjustments to initial jobless claims made the number look better last week and that was reversed this morning. All told, the number is encouraging and we should see decent job growth tomorrow.

The FOMC minutes revealed that the Fed is steadfast in its commitment to quantitative easing. It feels employment conditions are tenuous, housing is poor and inflation is benign. This safety net is also adding to investor confidence.

The economy will benefit from lower taxation. Republicans and Democrats agreed to extend the Bush tax credits and to lower payroll taxes. With more money in their pockets, Americans will spend. More than two thirds of our economy is dependent on consumption.

Holiday sales have been strong and earnings should be good. We are two weeks away from the beginning of earnings season and stocks typically rally into the announcements.

January is typically a bullish month. This is the third year of a presidential term and that has also been bullish historically.

Last weekend, China released its PMI. It declined slightly to 53.9, but that was anticipated. China has raised bank reserve requirements and it recently bumped interest rates up a quarter-point. These measures have barely slowed down their runaway economy.

The credit crisis in Europe is not likely to impact the market for at least a month. The ECB has plenty of money in its coffers to support bond auctions and China said that they will buy Spanish debt. In the absence of a credit crisis, the market will rally.

Stock prices look a little tired, but I do not see them declining much. Money is rotating out of bonds and gold as investors gain confidence. Asset Managers are waiting for a pullback, but I don’t believe we will see one after yesterday’s strong employment number. Stocks should continue to grind higher as long as European interest rates stabilize.

I am selling out of the money put credit spreads on strong stocks. If tomorrow’s Unemployment Report shows strong private sector job growth, I will buy in the money call options. My positions will be relatively small. I’m trying to hit singles on the way up and I don’t want to get blindsided by a selloff in Europe. I will be watching those auctions very closely.

I have been finding excellent opportunities on both sides of the market and I plan to carry both long and short positions. My weighting will favor the upside by a margin of 3:1 and my shorts will provide a nice hedge.

If you are long, stick with your positions. You have profits and that gives you staying power for tomorrow. If you are not in the market, consider selling some put credit spreads and ease in over time. 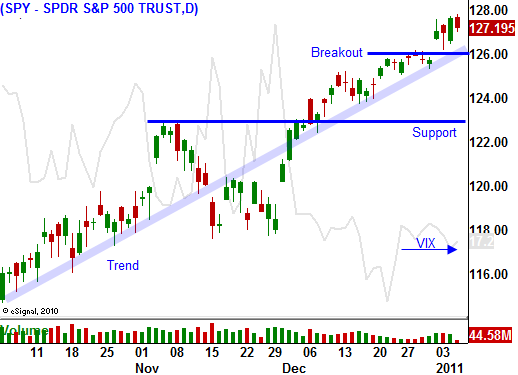