Look For A Light Round of Profit Taking! 2 Credit Crisis Videos Just Posted

I just posted two 5-minute videos on YouTube. Click here to view them. In the most simplistic way, I try to decribe the dire financial condition our country is in. Please comment on the clarity of the message on YouTube. If I missed the mark, I will redo them. This is a very important topic and I hope you will share it with others.

This morning, the long-awaited Unemployment Report was released. A blowout ADP report earlier in the week had analysts scrambling to raise their forecasts. The consensus estimate was 175,000 new jobs in December and nonfarm payrolls only increased 103,000. Collectively, November and October were revised to show 70,000 more jobs. This was clearly a disappointment and we could have seen a nasty decline this morning.

Stocks shouldered the news and they are trading higher 30 minutes after the open. The only explanation is that market takes comfort knowing that quantitative easing will continue.

Inflation has been benign and next week we will get the CPI and PPI. I’m expecting wholesale prices move higher, but those price increases will not be passed on to consumers.

The economy has been improving, but not enough to justify the recent run-up in interest rates. I still believe risk is getting priced into bonds. Our national debt continues to escalate and now that tax credits have been extended and payroll taxes will be reduced, the deficit will grow. The debt ceiling of $14.29 trillion will be hit in March and Congress will have to raise it like it has for decades.

Early in the year, I still believe that there will be enough money to stabilize these bond markets. The ECB/IMF will buy as many bonds as they have to keep a lid on interest rates. If credit concerns are suppressed, the market will rally.

Monday, Alcoa will kick off earnings season. Most of the major announcements won’t start for another 10 days. Stocks have positive momentum and I believe they will rally into announcements. We are likely to see cautious trading ahead of European bond auctions and if they go well we will get a relief rally later next week.

Stocks held up well this morning after a disappointing report. There is a strong bid to the market and I feel confident selling out of the money put credit spreads on strong stocks. I will focus on January options today and Monday. I want to take advantage front month time premium decay and I don’t want to span earnings releases. These credit spreads must expire before the company announces.

The big hurt is going to come, but not yet. Every day that passes without a sovereign default increases the chances of a big rally. Timing is critical and I am trading with one foot on the gas and the other on the brake. There will come a day when we need to slam on the brakes and shift into reverse, but not yet.

Look for profit taking today. The selling should be contained. 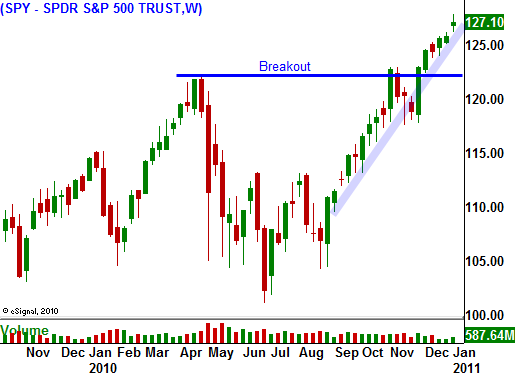