Credit concerns in Europe are on the front burner. Greece, Portugal, Spain and Italy will be auctioning bonds this week. There is nervousness ahead of those events and the market is taking a breather.

The ECB said it will support those auctions. Japan and China have also stated that they will be actively buying those bonds. This means that euro interest rates will stabilize and the market will be able to focus on earnings.

Alcoa posted decent numbers yesterday and the stock has been able to hold recent gains. Intel will release after the close Thursday and J.P. Morgan Chase will release before the open Friday. I am expecting positive results from both and the market should be able to rally later in the week.

The economic releases are light and they will not have much of an impact on trading. The PPI will be released Thursday and wholesale prices are likely to move higher. The CPI will be released Friday and it should be benign. Producers have not been able to pass on higher costs and they won’t be able to until the economy strengthens. This will impact profit margins in Q4. Initial jobless claims have been declining and I expect that trend to continue. Retailers reported weaker than expected same-store sales last week and the expectation for a poor retail sales number on Friday is already priced in.

Next week, Apple, IBM, Western Digital, Goldman Sachs, Wells Fargo, eBay, F5 Networks, Seagate, Johnson Controls, Morgan Stanley, Union Pacific, Google, Bank of America and General Electric will release earnings. The price action ahead of these numbers should be positive. Stocks have rallied into the first two weeks of earnings season and that pattern has been in force for more than a year.

Debtor nations continue to issue new debt so that they can pay off previous lenders. They keep spending more than they generate in revenues and this global Ponzi scheme will make Bernard Madoff look like a saint when it blows up. With the exception of China (which actually has cash reserves), countries that are lending money for the bailouts are actually pushing themselves further into debt. The bailouts won’t accomplish anything; they will simply buy a little time. This is like pulling someone halfway out of quicksand and then letting their hand go. Structural debt problems will suck these countries right back into trouble.

We are not going to concern ourselves with the credit crisis yet. As long as investors believe that there is a way out, the market will grind higher. I don’t like trading earnings releases and the first week can be like a mine field. I have been selling out of the money January put credit spreads on stocks that release earnings after expiration. That strategy has been working well.

Expect to see some volatility tomorrow and Thursday. Prices will stabilize and the market should grind higher next week. The financial sector will be critical to the rally. Banks have been moving higher and earnings should be good. Keep an eye on the reaction to J.P. Morgan Chase’s earnings on Friday and use that as an indicator. 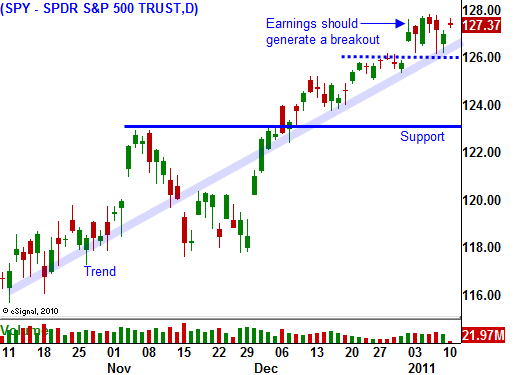