My biggest promotion of the year has started and I just recorded this VIDEO Subscribers can get all of my products and services for a year at a deeply discounted price. Click Here to sign up. This is the lowest price of the year and the special offer will end soon.

After an extended holiday weekend, you would expect to see more action. Prices are unchanged and the market is preparing for a big round of earnings releases this week.

The market has been pushing higher and that is typical as earnings season kicks off. Last week, Alcoa, Intel and J.P. Morgan Chase posted decent numbers. Intel sparked a rally in semiconductors, but it failed to move higher itself. Investors fear that the iPad sales will steal notebook/laptop demand. J.P. Morgan Chase beat estimates but part of the profits came from a reduction in bad loan reserves. The quality of its earnings is in question.

This morning, Citigroup posted results. They released $2.3 billion in bad loan reserves and they still missed estimates. The stock is trading lower this and the financial sector may not be the catalyst I expected. Tomorrow morning, Goldman Sachs, Bank of New York, Northern Trust, State Street, U.S. Bancorp and Wells Fargo will release. Last week, I thought banks might fuel a rally, now I am not sure.

After the close, Apple, IBM and Western Digital will release earnings. Tech needs to lead this rally. Apple may have a difficult time moving higher now that Steve Jobs has taken a medical leave of absence. IBM has been trading in a tight range since November and it is trying to break out. Intel reported solid commercial sales and I believe IBM will post a good number and move higher. WDC has not participated in the rally and I don’t believe it will get above $36 on the news.

European bond sales have gone well and that should pave the way for a rally. Portugal and Spain had success with private placements and now Belgium will attempt the same. European banks are buying the bonds and the countries are able to avoid auctions. Structural debt problems will continue to drag these countries down and eventually the credit will dry up. Interest rates in Germany and the US are creeping higher today.

Last week, we saw higher wholesale prices and consumer prices. Inflation will become a concern in 2011. Oil is almost up to $100 per barrel. Food costs around the globe are increasing and severe weather has reduced crop supplies. Prices have jumped and this will impact discretionary spending. I also believe that inflation will hurt profit margins. Wholesale prices have moved higher and companies are not able to pass higher costs on to consumers.

I believe the next two weeks of earnings should be positive. The headwinds will start to blow and the market will have a difficult time adding to gains. By the end of next week I will sell my calls. I am long a handful of in the money options on commodity stocks. I am more heavily weighted in my put credit spread positions and most of them will expire this week. I feel that restaurant and retail stocks are tired and I will start to sell February out of the money call credit spreads on these stocks.

As I mentioned late in December, I am keeping my risk exposure small and I am trying to hit singles. The bullish sentiment is very high and speculators need to get flushed out.

The nature of the next selloff is of great interest to me. If the decline is merely a profit-taking “shakeout”, I will buy the dip on support. If it is due to rising PIIGS interest rates or a problem in our muni market, I will be ready to take short positions.

Look for positive price action this week. It could be helped by option expiration buy programs. I am not expecting an explosive move, just a grind higher. 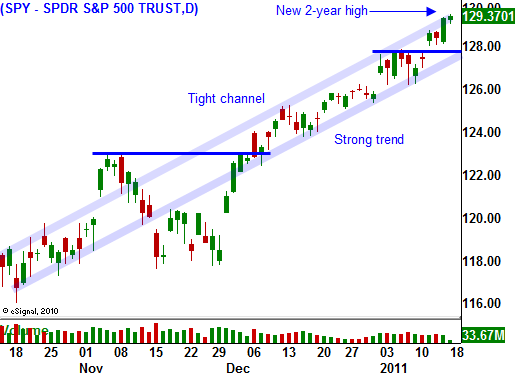