Financials Are Weighing On The Market. Stocks Will Hold Up For Another Week.

This morning, stocks are testing the downside. The move is earnings related and expectations might have been a bit too optimistic.

IBM, Apple and Western Digital posted solid numbers and those stocks are trading higher. Tech needs to lead this market higher. Overall, semiconductor demand was good, but there are concerns of an inventory overhang.

Goldman Sachs, Wells Fargo, U.S. Bancorp and Northern Trust released earnings this morning. Trading revenues are down at most investment banks and that is weighing on those stocks. Banks have been able to meet or beat estimates, but the profitability has come from a reduction in bad loan reserves. The quality of the earnings is low. Financial stocks have lagged the market and they had the potential to fuel the next leg of the rally. That seems unlikely now that major firms have released and generated a negative reaction.

EBay, F5 Networks, Seagate and Xilinx will release after the close. The market is expecting good numbers and these companies will have to substantially beat estimates to move higher. Before the open tomorrow, Fifth Third, Freeport-McMoRan, Johnson Controls, Morgan Stanley, Parker Hannifin, PNC, Union Pacific and United Health will post results. I believe Johnson Controls will move higher due to strong auto sales. Parker Hannifin should see strong international sales and increased demand in oil services. Union Pacific should also do well since rail traffic has been improving. The rest are likely to tread water.

The earnings have been decent, but that is priced into the market. Year-over-year comps will be increasingly more difficult to beat since the economic recovery was underway a year ago. We still have some very strong earnings ahead of us and I do not expect to see a heavy dose of profit-taking for another week.

I am not looking for a massive decline in the next week. The credit situation in Europe has been pacified. The ECB still has plenty of money in its coffers and China/Japan vowed to support European bond auctions. China’s economy is still pushing forward even after monetary tightening and interest rate hikes. As long as they continue to grow, bulls will shift money out of bonds and into equities.

If the market does not stage a late day rally, I will sell most of my call positions. I don’t want to see what little profit I have turn into a loss. My put credit spreads are in great shape and most of them will expire this week. I do have a few February positions, but they are small. I have started selling call spreads on retail and restaurant stocks.

Look for a small round of profit-taking this week. As we get past next week, the selling could be more pronounced. Profit margins will be squeezed as producers absorb higher costs. The next round of PIIGS bond auctions will be upon us and this will spook investors. Stocks are priced for excellent earnings and that sets us up for profit taking. Once that sets in, bullish speculators will get flushed out. The optimism is too high and bullish sentiment is off the charts. I expect SPY 123 to hold. 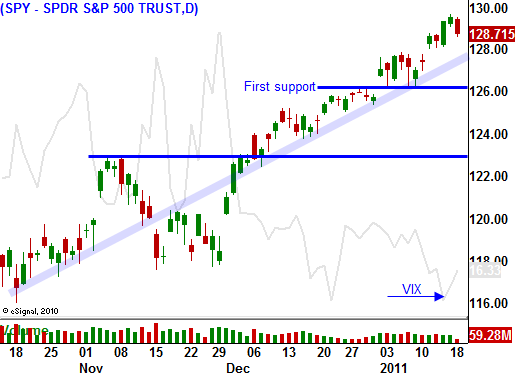