My biggest promotion of the year has started and I just recorded this VIDEO Subscribers can get all of my products and services for a year at a deeply discounted price. Click Here to sign up. This is the lowest price of the year and the special offer ends Sunday January 23rd.

This morning, the market rebounded from a round of good earnings. Google and General Electric are setting the tone. Over 85% of the companies that reported after yesterday’s close hit or exceeded consensus estimates.

The market decline earlier in the week was nothing more than profit-taking. Semiconductor inventory build ups and low-quality earnings from the financial sector spooked investors. Bullish sentiment is off the charts and we need to flush out speculators. I am expecting good earnings, but the market will start to hit some headwinds after next week.

Good news is priced in and stocks have not been able to advance even after posting solid results. Google is a classic example. It handily beat estimates and it jumped higher on the news. After 90 minutes of training, those gains have vaporized. Parker Hannifin is a cyclical stock and it dropped 8% after posting good results. This sector has been a market leader and it might be getting tired.

In the chart below, I have highlighted the Asian stock markets. This part of the world has the greatest economic growth and you can see that stocks are struggling. China is clearly in a downtrend. The entire world is depending on it to pull us out of the recession. China has been raising bank reserve requirements and interest rates to slow down a runaway economy. The Hang Seng pulled back and it has not been able to challenge the highs. Japan dropped significantly last summer and it is struggling to recover. It is nowhere near the six-month highs.

All seems well in our market, but it is important to be aware of other markets. Our economic recovery is fragile and the Fed has its foot on the accelerator.

Governments provide a stable environment for businesses. They facilitate commerce and money flow. I consider them the foundation. Corporations are the house that gets built on top of the foundation. Currently, we have an all brick energy-efficient house with a sturdy roof and sound plumbing/electrical. Corporations have been fiscally responsible (strong balance sheets) and they are making profits hand over fist. Unfortunately, the foundation has major cracks. We continue to live happily in this house oblivious to major cracks in the foundation. Life is fantastic and most people can’t fathom that it could change quickly.

I just read a statement by Japan’s Finance Minister and he is concerned about a potential rise in interest rates. That prompted me to look at Japan’s balance sheet. I reviewed documents from the Ministry of Finance and I was horrified. The credit crisis could actually start in Japan. Their national debt is 170% of GDP. Interest expense and Social Security exceed tax revenues and they have to issue new debt each year to account for the 50% budget shortfall. They are already in the situation I have forecasted for the US years from now.

They have been able to fly under the radar because citizens finance almost all of the government’s debt. The savings rate in Japan has steadily declined from 10% down to 2% in the last decade. This year it is very possible that they will need foreign investors to buy their debt.

This has a number of implications. First of all, interest rates in Japan will rise as the demand for debt dries up. They currently have a 1.25% interest rate yield. Should the rate double to 2.5% (still very low), tax revenues won’t cover their interest expense. Japan is our third largest bondholder and they might have to resort to selling U.S. Treasuries to generate cash. This will take a major lender out of our auctions and it will create a net seller. That means US interest rates will quickly move higher.

Japan is the second largest economy in the world and its GDP is roughly equal with China’s.

Europe depends on foreign investment. That is why we hear about it. Europe is trying to secure financing for future bailouts. That means our European lenders will be focusing on their own needs. This is another reason US interest rates will rise this year.

For the time being, the credit crisis is on hold. I am seeing clear signs that this will manifest within the next two years. The market has backed off of its highs this morning and I am not taking any new positions. I have put spreads that will be expiring today and this has been a nice start to the year. I will further investigate the situation in Japan and I will include numbers from the Minister of Finance next week. As we have seen, this fairly tale of solving debt with more debt can continue. I am not ready to short the market, but I am very nervous about taking long positions. 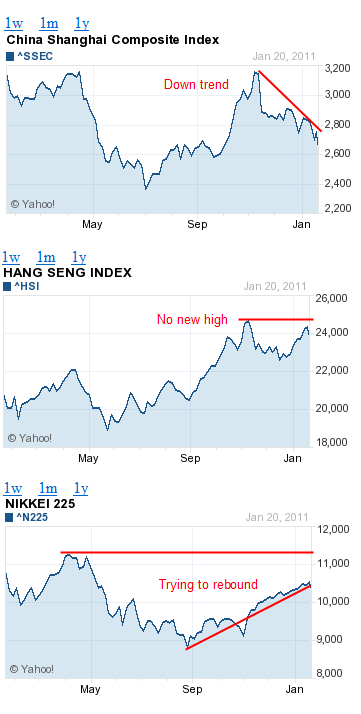