Earnings Have Been Good but the Reaction Is Weak. Traders Nervous About FOMC.

My biggest promotion of the year has started and I just recorded this VIDEO Subscribers can get all of my products and services for a year at a deeply discounted price. Click Here to sign up. This is the lowest price of the year and the special offer ends Monday January 31st.

The market is pulling back this morning and the price action suggests a selloff into the close. The earnings news has been decent, but the reaction has been negative. Stocks are fully priced and profit-taking has set in.

About one third of the S&P 500 has reported. Over 70% of the companies have exceeded earnings estimates while 12% have hit expectations. The news has generally been good, but optimism is high and bullish speculators need to get flushed out.

Results are pouring in from all sectors and this is going to be a very busy day for earnings. I like what I’m seeing in industrial stocks with the exception of steel. Rail has also been strong. Consumer discretionary stocks and financial stocks are weak. Given the negative reaction to earnings, I believe today’s decline will continue tomorrow.

Traders will be nervous ahead of the FOMC statement Wednesday afternoon. Economic conditions are gradually improving and the Fed might reflect that in their statements. This could be construed as hawkish, signaling the end of quantitative easing. Interest rates around the world are on the rise and that will put pressure on our bond market.

Overnight, India raised interest rates by .25%. This was the seventh rate hike in less than a year. Most economists believe that they will raise rates by at least .5% in 2011. In December, wholesale prices rose 8.43%. India’s stock market has been in a steady decline.

Many traders fear that China will raise rates ahead of their New Year. It has been typical for them to act before a major holiday so that markets have time to digest the news. I don’t believe this will be a big issue. China will only raise rates if their PMI has not declined. That number will be released February 1. An interest rate hike that is accompanied by strong growth should not have a negative impact on the market.

The UK was the first European nation to release GDP. Analysts expected .5% growth and economic activity declined by .5%. Fears of a double dip recession have surfaced. England’s budget deficit reduction efforts are starting to weigh on economic activity.

The European Financial Stability Facility (EFSF) will issue bonds to fund potential bailouts in Europe. This concept has been well received and the €5 billion auction received €48 billion in orders. It was oversubscribed and that is calming credit crisis nerves. This is a critical piece of the puzzle. As long as investors believe that the situation is under control, the market will rally longer-term.
Tonight, President Obama will whisper sweet nothings to the American public as he delivers his State of the Union speech. We can expect to hear about the many accomplishments in the last two years and how our country will recover. He has supported lower business taxes and a reduction in regulation. These are market friendly initiatives and the market could have a favorable reaction.

All told, this is a mild round of profit-taking. Credit conditions in Europe have stabilized and growth in China is on track. Bullish sentiment is extreme and speculators need to get flushed out. Stocks are priced for perfection and they are likely to pull back in the next two weeks. If the S&P 500 is down by more than 10 points this afternoon, we will close on the lows. The market will continue to move lower and the President’s address will help to soften the blow. Tomorrow afternoon, get ready for another small wave of selling after the FOMC.

I have been selling a few out of the money call spreads on stocks that have formed a resistance level and have not moved higher with the market. Many have recently posted earnings and are moving lower. This set up is very attractive and I am selling calls above the resistance level. This will provide added protection for the spread since the stock will have to breakout to hurt the position. I will not be selling put spreads until the SPY tests first support at 126. If you are long this market, reduce positions – at very least add a few short positions. 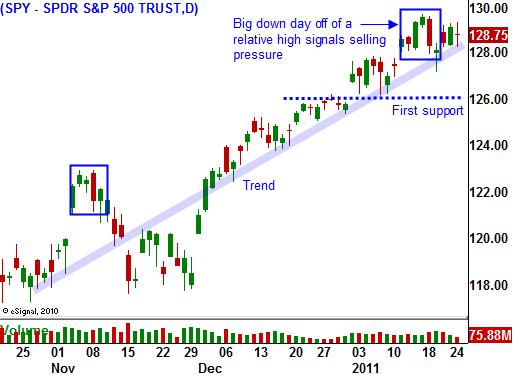