Watch The Reaction To The FOMC Today. Stable Prices After The Release Is Bullish

This morning, stocks surged higher after an inspiring speech by President Obama. He stressed the need for bipartisan unity as our country tackles major issues. As I mentioned yesterday, his comments would be “market friendly”.

The President wants to lower corporate taxes and reduce regulations. A simplified tax structure will eliminate loopholes and add to tax revenues even after the actual rate is reduced. This is a great plan and it should work on a personal level as well. More than 80% of tax revenues come from individual Americans and a flat tax should be instituted.

The President also referenced the hurdles faced by corporations when they try to comply with a multitude of regulatory agencies. The bottom line is that the government needs to provide competitive environment for corporations. If it fails to do so, companies will leave the country and jobs will be lost. This has already been happening, but perhaps it’s not too late to stop the exodus.

The market also benefited from new home sales this morning. They spiked in December and they hit a new eight month high. Housing is a critical component for a sustained economic recovery. From the years 2000-2005, 50% of our employment growth came from the housing sector. This improvement is encouraging, but I still feel we are at least a year away from the bottom. Banks are straddle with inventory and the need to foreclose.

The earnings news has been excellent. Stocks are trading at low valuations and as long as credit concerns are contained, the market should move higher. The EU has established a financing facility and it will start selling Eurobonds. This concept has been well received and PIIGS interest rates have stabilized.

This afternoon, the FOMC will release a statement. I believe they will point to improving economic conditions and their rhetoric could signal the end of quantitative easing. It has to end sooner or later and the market will have a negative reaction when it happens. Rising interest rates are not problematic if they are accompanied by economic growth.

Initial jobless claims are projected to come in at 410,000 tomorrow. I am not expecting a big reaction to this number unless it is considerably below 400,000 (this would be bullish). Durable goods orders are volatile and the number is typically taken with a grain of salt. Consensus estimates are at 1.5% growth.

The earnings today and tomorrow should be mildly positive. Companies will post good results and that news is already priced into stocks. As a result, stocks are not surging after a good number. Over 70% of the firms have exceeded estimates and 12% have hit their number.

Stocks should continue to grind higher this week, but the headwinds will start to blow in coming weeks. We are right up against psychological resistance and the market is trying to break through DOW 12,000 and S&P 1300. If the market does not decline after the FOMC statement, it could breakout. If that happens, I will start selling out of the money put credit spreads on commodity stocks today. I won’t take large positions, but I do like the strength in these stocks. 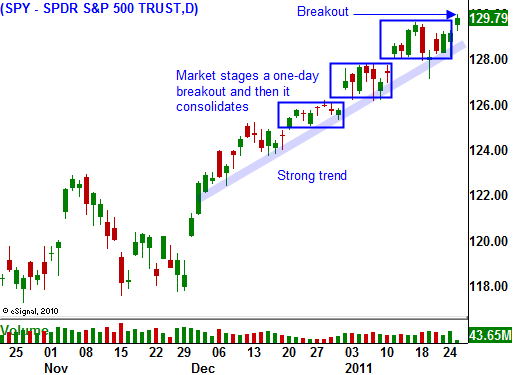