My biggest promotion of the year is a few days away from ending. Last night, I recorded this VIDEO It includes my track record for each service and a look at all of our current trades. Subscribers can get all of my products and services for a year at a deeply discounted price. Click Here to sign up. This is the lowest price of the year and the special offer ends Monday January 31st. We are off to another great year!

The market has developed a pattern where a big one day gain leads to a new relative high. After a week or two of consolidation it stages another breakout. Yesterday’s price action had the feel of another move higher. Stocks opened strong and the DOW momentarily broke through 12,000 on a favorable housing number. Psychological resistance held and the market fell back into its trading range late in the day.

Earnings have been excellent, but prices have run up ahead of the news. The reaction has been muted and in many cases stocks are lucky if they can hold recent gains. Almost 75% of the companies that have released earnings have exceeded estimates and another 12% have hit expectations. This is a strong showing by historical comparison. Stocks are trading at a low forward P/E of 13 and they are cheap.

The only “fly in the ointment” is the threat of a credit crisis. This morning, Japan’s debt rating was lowered one notch by S&P. As I mentioned last week, this could be where the credit crisis begins. If interest rates rise slightly or Japanese citizens lose their appetite for their country’s bonds, a crisis will unfold.

Debt levels are extremely high around the globe and problems can surface in a number of areas. Pension liabilities are causing huge state budget deficits and investors have pulled $20 billion out of municipal bond funds in the last 10 weeks. This raises the cost of capital and it adds to the problem.

The EU formed a new credit facility to finance future bailouts. Demand for these new bonds has been fantastic and the credit concerns in Europe have temporarily subsided. I don’t believe conditions in any of these areas will deteriorate in the next two months and that means the market should move higher.

Yesterday, the Fed indicated that it will complete QE2. It still feels that the housing market is tenuous and the economic recovery is fragile. This backstop will give investors confidence. I felt the comments would be more hawkish and they would dispel the notion of QE3. That was not the case and the statement was “market friendly”.

China has been trying to slow down its runaway economy. It has increased bank reserve requirements many times, it recently raised interest rates by a quarter-point and now it has taken steps to avoid a “housing bubble” by raising the required down payment to 60% on a second home. . Many traders believe that they will raise interest rates before the Chinese New Year which begins February 3. Next Tuesday, they will release the January PMI. If it comes in hot (above 54.0), a rate hike is likely. Higher interest rates are not bearish if they are accompanied by strong economic growth and any negative reaction will be short-lived.

This morning, initial jobless claims spiked by 51,000 to 454,000. This was much worse than analysts expected. Many analysts are blaming bad weather. Durable goods orders fell 2.5% when analysts had expected an increase of 1.5%. These releases have had little impact on the market and tomorrow’s GDP release is not likely to move prices either.

Next week, Chicago PMI, ISM manufacturing, ADP employment, initial claims, ISM services and the Unemployment Report will be released. Economic conditions have been gradually improving and these numbers should be “market friendly”.

The market is due for a pullback, but the selling will be contained. Bullish sentiment is off the charts and speculators need to be flushed out. This decline will represent an excellent buying opportunity.

As earnings season enters the second half, prices tend to weaken. All of the good news is built-in and stocks simply run out of gas. That sets up a potential for a small correction. I believe SPY 126 will be tested in the next two weeks. That support level will hold and it will present an excellent buying opportunity.

I am currently selling out of the money call credit spreads on stocks that have significant resistance levels and that have not rallied with the market. I also want to see a muted or negative reaction to earnings. The short strike is above resistance so that the stock has to break out to put the position in danger. I have also been selling out of the money put credit spreads on commodity stocks. These positions are small and I will only add on a market pullback.

Look for a slight pullback in coming weeks and use that as an opportunity to get long. 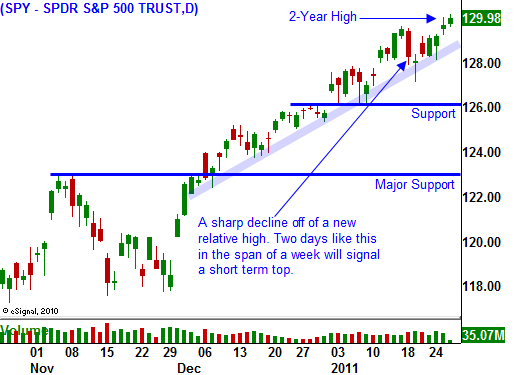