The Market Is Struggling To Get Through Psychological Resistance Levels

My biggest promotion of the year is ending. Wednesday night, I recorded this VIDEO It includes my track record for each service and a look at all of our current trades. Subscribers can get all of my products and services for a year at a deeply discounted price. Click Here to sign up. This is the lowest price of the year and I only offer it once! The special offer ends Monday January 31st. We are off to another great year!

The market has been inching its way higher all week and it is trying to break through psychological resistance at DOW 12,000 and S&P 1300. Earnings have been solid and 75% of the companies have exceeded estimates. Good news is priced in and stocks are sluggish even after posting good results.

The economic news this week has been a little disappointing. Yesterday, initial jobless claims spiked by 50,000 and durable goods orders fell 2.5%. Stocks were able to shrug that news off. This morning, Q4 GDP came in at 3.2%. Analysts were expecting 3.5% growth and the miss barely moved the market. Traders focused on positive components within the release and the market is inching higher before the open.

Credit concerns in Europe have subsided. The new financing facility developed by the EU is catching on and the demand for Eurobonds is high in the early going. Greece may repurchase some of its high yield debt and instead borrow from this new bailout fund. Spain has reached a deal with labor unions and is on the verge of raising the retirement age of 65 to 67. I applaud this move and we need to see similar action in the US. Unfortunately, Spain’s unemployment rate rose back above 20% and they are far from out of the woods.

The market is extremely resilient it has been able to completely ignore major news events. Ireland’s parliament is being dismantled, governments in the Middle East could be overthrown (Tunisia, Yemen and Egypt) and Japan’s debt rating was lowered by S&P. The consensus is that these problems will be contained and they don’t pose an immediate threat to the market.

Stocks are undervalued and they are trading at a low forward P/E of 13. Earnings are excellent, balance sheets are strong, interest rates are low, inflation is contained, the Fed will continue QE2 and the President is suddenly “pro-business”. As long as the credit crisis is contained, this market will head higher.

Bullish sentiment is off the charts and I am expecting a short, sharp decline in the next two weeks. This will flush out speculators and set up a nice buying opportunity. It is most likely to happen after we breakout through these significant psychological resistance levels. Speculators will load up on the breakout only to have the door slammed in their face. As stocks reverse, they will bail out of long positions. When the dust settles, it will be time to get long.

Structural debt problems have me bearish long-term. Deficits will reach a tipping point and a credit crisis will unfold. We could be a few months or a few years from hitting that point. It all depends on the willingness of investors to buy sovereign debt. In the meantime, it is all systems go.

In the late 90s, any analyst worth his salt could see that stock valuations were outrageous. However, anyone who shorted the market prematurely was carried out in a body bag. The NASDAQ almost double in the last year before the bubble burst. Not only did they lose money on their short positions, they missed one of the best rallies ever. When the market finally did rollover, they were out of money. We will ride this wave as long as it lasts.

Traders are back after being snowed in yesterday. Advancers equal decliners and the action should be subdued.

A big week of economic releases lies ahead. Initial claims spiked the last two weeks and that increase has been dismissed as “seasonal” and “weather related”. If jobs worsen next week or China’s PMI comes in weak (Wednesday) that could be the catalyst for a dip. I am keeping my bets small. I want to get long commodity stocks and cyclical stocks on a pullback. 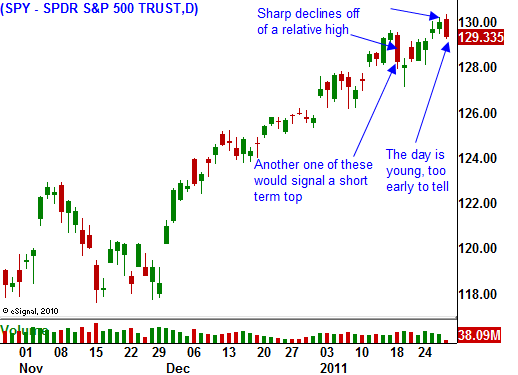