The Market Could Settle Into A Trading Range Over the Next Few Weeks.

The market wants to push higher, but it needs a catalyst. Yesterday, stocks staged an early rally and it looked like we were off to the races. As the day progressed, choppy trading set in. This is not typical of the price action we have seen in the last month and it might be a sign that stocks are tired.

The market has run up more than 100% since its March low of 2009. Momentum is strong and Asset Managers are loading up on any dip. Stocks are attractive relative to bonds and we should continue to see rotation into equities. This means that any decline is likely to be short-lived.

Emerging markets have not fared as well. China, India and Brazil are all down substantially this year. Valuations were getting stretched and inflation is putting upward pressure on interest rates. As the cost of capital rises, economic expansion will contract.

This week, the PPI and CPI were released. Traders have been able to dismiss inflation because price increases were contained to food and energy. That is no longer the case and we saw core inflation at the wholesale and retail level increase.

The two other economic releases today were mixed. Initial claims increased by 25,000 to 410,000. Many analysts attribute the decline last week and the increase this week too bad weather. The Philly Fed rose to 35.9 from 19.3 a month ago. This is the highest level in seven years and the market had a positive reaction to the number.

The news from Europe was also mixed. Spain auctioned €2.5 billion in bonds and yields dropped. The ECB was probably active in this auction and they helped to support it. One of Germany’s largest banks WestLB went to auction out of necessity and only two bidders expressed interest. This casts a dark cloud over Germany’s banking system. Many financial institutions have not taken write-downs and they are on government life-support. Credit issues are alive and well, it’s just a matter of time until fear is reignited.

Tensions are building in the Middle East and unrest is spreading to other Arab nations. Three people were killed in Bahrain in protests last night and Libyans are planning a “Day of Rage” against Muammar Gaddafi. If the unrest spreads to Saudi Arabia and Iran, energy prices will spike. From a trading perspective, civil/political unrest and war are less threatening than a credit crisis. The first could result in a decline while the second could end in a collapse.

Earnings season is winding down and the economic releases next week (initial claims, your confidence, durable goods and GDP) should not provide any surprises. Monday is an exchange holiday and trading should be a light.

I believe the market will settle into a trading range. There are not any catalysts to push it higher and buyers are scooping up stocks on any dip. Asset Managers don’t want to chase stocks and some are willing to take profits after a massive rally.

Once the market spends some time at this level it will gather enough strength to make another run. If we do not get any weakness soon, I will start buying call calendar spreads. I plan to buy April and May out of the money calls and I will sell March calls. If the market is flat or gradually moves higher, these positions will perform well. I would like to buy calls on a pullback, but I don’t believe we will see one. I would also like to sell out of the money put credit spreads, but option premiums have declined to the point where the risk is not worth the reward.

They are still many trading opportunities within the market and money is rotating from one sector to another. 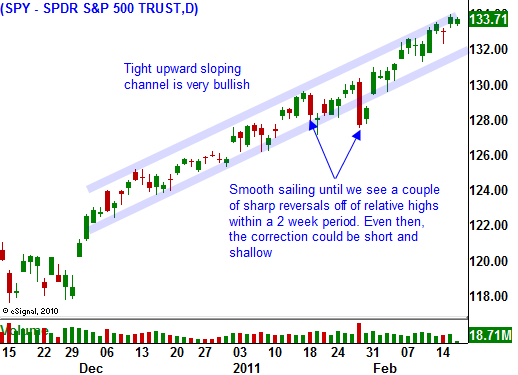