This freight train just keeps rolling. Market momentum is pushing stocks higher and the trading pattern is very predictable. From a two-month perspective, this is a bullish technical pattern. We will see an occasional sharp decline to flush out speculators and then prices will rebound quickly.

If not for the threat of a credit crisis, the market would have lifted off long ago. Corporate profits were fantastic and stocks did not move high enough to reflect the news. Earnings for the S&P 500 are up 35% year-over-year and on average stocks are trading at a forward P/E of 13. As long as valuations do not get stretched, this rally can continue. Overbought conditions can exist for long periods of time when you have the right conditions.

Interest rates are low, the Fed has its foot on the gas, and we are in the third year of a presidential term. These conditions are not as concrete as they were a month ago. As the economy improves, interest rates and inflation are creeping higher and the Fed will stop easing. Core inflation was up this week and we saw that on a wholesale and retail level. Obama is making nice with corporations (considering lower tax rates and decreased regulation). A simplified tax code for corporations would be bullish, but this is a long way from passing. It is doubtful that all of the oversight committees formed in the last two years will be dismantled. The salmon issue referenced in the State of the Union Address might get resolved, but from my perspective this is just lip service as 2012 elections approach.

Economic conditions are improving and confidence is running high. Money is shifting out of bonds and into equities as the appetite for risk grows. Asset Managers who have been too conservative are now trying to place money. They are aggressively bidding for stocks and it has been weeks since we’ve seen a decent decline.

Retailers and restaurants will release earnings next week. I am expecting good results for these two groups. The earnings firepower has been exhausted and explosive moves have subsided.

Monday is an exchange holiday and the economic releases are light next week. Initial claims, new home sales, durable goods and Q4 GDP will be released. These numbers are not likely to have much of an impact.

Overnight, China raised bank reserve requirements. This is the second time they’ve done that this year and they raised reserve requirements six times last year. They have also hiked interest rates twice this year. They are trying to slow down their economy and inflation has become a real issue. Even after these efforts, China’s economy continues to grow at a double digit pace. The fear is that the central bank will overcompensate and their economy will decline at a rapid rate. Without question, their boom has a speculative feel to it.

The fear of a credit crisis has evaporated. It is inconceivable to most people that it can happen on a global basis. After extensive research, I have come to the realization that it is possible and probable. The wealth centers of the world have reached the point of no return and deficits continue to spiral out of control. Structural issues are sucking them deeper into debt and interest expenses are reaching critical levels. The US, Europe and Japan are all competing for capital to finance these deficits and that means interest rates will climb, accentuating the problem.

I now believe the crisis will start in Japan. If their interest rates increase from current levels (1.25%) to just 2.5%, annual tax revenues won’t cover their interest expense. This is taken right from the balance sheet of the Japanese Minister of Finance. Their debt was just downgraded by S&P and this is a time bomb that no one is focused on. Japanese citizens buy 95% of their country’s debt and that is why they have flown under the radar. The deficits are growing at an alarming rate and domestic demand won’t be enough to cover the bill in the near future. When they have to go outside of the country for financing, they will find stiff competition from other debtor nations like the US. If Japan’s interest rates rise to 4% (not unreasonable) due to risk, the house of cards starts to crumble around the world.

By the way, Japan is on par with China as our largest debt holder. They won’t be supporting our auctions and soon they will have to liquidate those holdings. When they become a net seller of US Treasuries, our interest rates will spike.

These are not worries for today. Right now, the market wants to climb. Let’s enjoy the ride.

It’s been a great month and the majority of my put spreads are expiring today. If we don’t get a meaningful decline of 20 S&P points soon, I will start buying calendar spreads. I believe March will be flat and the market will gather strength heading into Q1 earnings. This strategy will get me into those call positions at a great price without taking much risk. If we do get a nice decline, I will buy my March calls back and add to positions. 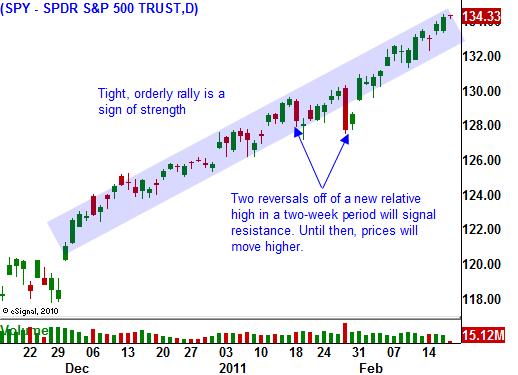