Unrest In the Middle East Sparks A Round of Profit Taking!

Over the weekend, the market found something to worry about. Unrest is spreading in the Middle East, China is tightening is working, Japan get’s a ratings warning and the ECB is ratcheting up inflation expectations.

Protests have spread from Tunisia to Egypt, Bahrain, and Libya. Libya is a large oil producer and energy prices are jumping. Gadhafi has banned foreign reporters and he threatens that blood will be spilled if protests continue. Rumors are that the army has fired upon civilians. Some of his cabinet has defected and the situation is deteriorating. This unrest continues to spread in the Middle East and conditions will not improve in the near future.

Our strategic partners (Israel and Saudi Arabia) are surrounded by chaos. Hopefully, the conflict won’t impact our allies and the US can remain on the sidelines. We can’t afford to spend another $500 billion a year defending the world.

China raised reserve requirements last week for the second time this year (they raised reserve requirements 6 times in 2010). They have also raised rates twice in 2011. HSBS provided a flash reading of their PMI estimate for the first time ever and it fell to 51.5 in Feb vs. 54.5 in January. The tightening measures are working and this is the slowest rate in 7 months. Traders will be wondering if they went too far.

A few weeks ago, Japan’s credit rating was lowered by S&P. As I mentioned Friday, they are likely to be the source of a future credit crisis. Any rise in interest rates would be devastating for them. This morning, Moody’s warned of a future downgrade if deficit spending was not reduced. This is the second largest economy in the world and they own 10% of our debt.

The ECB is worried about inflation and the rhetoric during next week’s meeting could change. Officials fear that higher food and energy prices could become permanent. This means that interest rates in Europe will start rising.

Last week, we saw higher inflation when the PPI and CPI were released. Higher prices are starting to get passed on from producers to consumers and the core rose in both cases. This will also put upward pressure on US interest rates.

We have our own protests in the US. In Wisconsin, the state Senate left the capital building before a vote to cut collective bargaining rights and benefits for pu8blic workers was conducted. States have massive deficits in part because of generous benefits for public workers. For decades, the unions have collected dues and used that money to back politicians who support benefit increases for public employees. This cycle has to stop and we have to change the system on a national level as well. Congress should not be able to increase their own pay and their benefits.

In Washington DC, the spending debate continues. A temporary solution needs to be passed to avoid a shut down. Republicans and Democrats have been negotiating for more, not less and our national debt is out of control. Instead of determining how to restructure Social Security and Medicare, the Republicans were able to hang onto low taxes and the Democrats negotiated benefits extensions and payroll tax decreases (both of which increase the deficits).

So, let’s think about how all of this plays out in the next few weeks. First of all, the market is overdue for a correction. Bulls need to get flushed out. There is strong support at SPY 126 and major support at SPY 123. I would be surprised if we test major support. The market momentum has been strong. Corporate profits are robust and money will flow out of bonds and into equities as interest rates rise. Asset Managers are anxious to buy stocks on a dip.

As long as the Middle East conflict does not result in an attack on Israel and as long as it does not spread to Saudi Arabia, the impact on the global economy will be minimal. The market has been able to deal with temporary spikes in energy prices. Some of the oil wealth in Saudi Arabia has filtered down to citizens and the conditions are not as volatile as they are in other Arab nations. There was concern that this unrest could spread to China. I don’t feel that is a threat since their standards of living have been improving and a well-educated workforce is employed.

Many analysts will view the drop in PMI in China as positive. It means they will be able to stop tightening.

The ECB will sound more hawkish, but they won’t raise rates when economic conditions are fragile.

Japan’s issues will continue to fester, but the downgrade warning from S&P last week had little impact. Traders are likely to dismiss this as long as domestic demand for Japanese debt continues to satisfy their funding needs.

In the US, Republicans and Democrats will use this opportunity to bash the other side and they will reach a temporary compromise as they have for decades.

The market is due for a pullback and this one could last a week or more. There are enough reasons for investors to take profits and bullish speculators will be forced out of positions. I don’t want to trade the downside because a violent snap back rally could result in large losses. The upward momentum is strong and I want to buy calls on support.

This is a good day to observe. We need to watch key technical levels as the selling pressure increases. Look for stocks that are holding up well. They will lead the rebound. 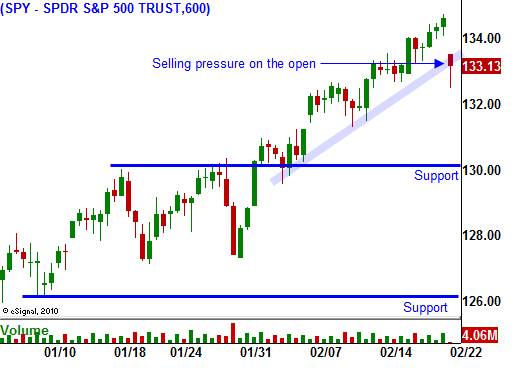