Yesterday, the market started on a weak note and it closed on the lows of the day. Unrest in the Middle East sparked a vicious round of profit-taking, but there were other factors as well.

Libya is an oil-producing nation, but Saudi Arabia can single-handedly pick up the slack if production comes to a halt. The greater fear is that Israel will be attacked or that protests will spread to Saudi Arabia. Overnight, King Abdullah said he plans to extend additional benefits to citizens. Some of the oil money has already filtered down to citizens in the form of good schools and healthcare facilities. Saudis are much better off than their counterparts in Libya. Traders will prepare for worst case scenarios and when conditions stabilize, the stage will be set for a rebound.

This morning, the Bank of England is more hawkish and rates could increase in May. The ECB is worried about inflation and their rhetoric might signal a rate hike when they meet March 3rd.

Congress is in recess, but budget talks will heat up next week. The government will run out of money on March 3rd if they can’t get a spending extension approved. Congress will be able to grill the Fed Chairman next week when he delivers his Humphrey-Hawkins testimony. There are usually some fireworks and this could also weigh on the market when Ben Bernanke discusses our nation’s debt.

Next week is shaping up to be busy. Major economic releases will also influence trading. Chicago PMI, construction spending, ISM manufacturing, ADP employment, the Beige Book, initial claims, ISM services and the Unemployment Report will be released. The economic news has been decent and this should provide support.

China’s PMI will also be released. HSBC provided a flash reading for the first time ever and they are projecting that PMI fell to 51.5 from 54.5 in January. If this comes to pass, it will have a negative impact on the market. A slowdown in China is bearish.

Bullish sentiment is overextended and we are due for a 5% correction. Asset Managers have been waiting for a pullback and there are enough negatives to push prices lower. They will patiently wait for support to be established and then they will start buying stocks.

I believe stocks will test the downside again today. There are enough potential “land mines” in the week ahead and it would be foolish not to lock in some profits after a massive rally. We are at the tail end of earnings season and all of the good news is baked in. During the last 6 quarters, stocks have typically declined as earnings season winds down.

The news is not dire, but it is “heavy” enough to create a week or two of selling. Inflation has been an issue and interest rates are expected to move higher. The Fed is nearing the end of QE2 and that alone will cause rates to rise. Higher interest rates are not a problem as long as they are accompanied by economic growth. The first move higher will provide a stiff head wind and traders will try to assess the impact on consumption and investment.

Don’t aggressively short this market and if you are long – get out. I like selling call spreads on cyclical stocks that were not able to break through resistance after earnings. This sector is overbought and many of the companies did not post great numbers. Don’t short CMI, BWA, DE or CAT. These are the real deal and they are making great money overseas. I also like selling call spreads in the restaurant space. Higher food costs will bite into margins and higher gasoline prices will hurt discretionary spending.

I would be anxious to get long at SPY 126 if we get that low. 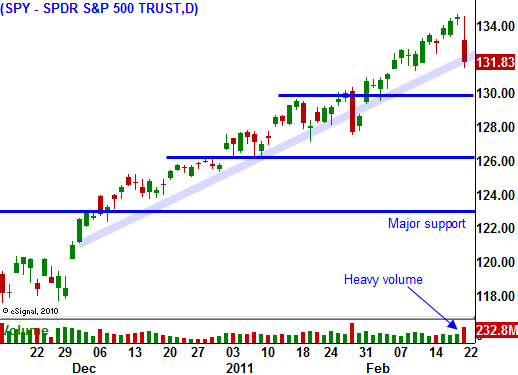