For the first time in months, we are seeing two-sided price action. There are enough cross-currents to spark profit taking and as I have been forecasting, the market will fall into a trading range.

Conditions in Libya are deteriorating and the Army has joined protesters in the west. It is just a matter of time until the government falls and we should expect bloodshed. Libya produces 1.6 million barrels of oil a day and 70% of it is already off-line. We can expect the remaining production to stop shortly. This light crude is easy to refine and it will be difficult to replace since Saudi Arabia produces a heavier grade of oil. We can expect higher oil prices for the next few months and the futures have already priced this in.

The standards of living are better in Saudi Arabia and oil money has filtered down to the people. King Abdullah will be extending another $30 billion in benefits and protests have been minimal.

Oil is the fabric to every economy and analysts are trying to figure out how this will impact economic growth. Food prices are also an issue. Global demand is growing and abnormal weather conditions have reduced supplies. In India, food prices rose 11% last week and that is on top of an 11% increase the week before. Their market declined 3% overnight and inflation is a major concern. In the US, if food and energy prices stay elevated for a prolonged period of time, it will impact discretionary spending.

The next week is filled with major events. China will release its PMI, the ECB will meet to discuss monetary policy, Chairman Bernanke will testify before Congress, our government faces a possible shutdown if spending limits are not raised and the biggest economic releases of the month are scheduled.

Rather than discuss each of the possible outcomes, I will say that we can expect choppy price action with a slightly negative bias. QE2 has almost run its course and interest rates around the world are heading higher. Inflation and no QE3 will push our rates higher, creating a stiff headwind for the market. Our government will have to cut expenses to balance the budget and that will slow economic growth.

Asset Managers don’t want to chase stocks. They are waiting for a pullback and there is a strong bid to the market. Corporate profits were up 35% year-over-year and the S&P trades at a forward P/E of 13. Stocks have made a huge run in the last 5 months, but they are not overvalued. I expect SPY 126 to hold over the next few weeks.

I also feel that resistance at SPY 135 will hold. Traders want to know if China over-tightened, if the ECB plans to raise rates and they want to see the 2011 budget. Protests in Saudi Arabia are planned on March 11th and they want to gauge the unrest. With all of this uncertainty, the market will probe the downside in search of support.

Given all of the other events in the market place, a good initial claims number and a poor durable goods number had little impact on the market.

In summary, this means we are likely to float around in the middle of that range (SPY 130 – 132) for the next week while we get some answers. Option premiums have jumped and this is a good time to credit spread. Sell out of the money call spreads on stocks that have firm resistance and backed off after earnings. Sell put credit spreads on stocks that moved through resistance after earnings and held that breakout (now support) the last two days.

Expect choppy price action until some of these major questions get answered. I believe that the market will test the downside and I believe we will have one more good push higher into April earnings season. That makes me a buyer on a big dip once support is established. I like SPY 126 and I love SPY 123. I doubt we get that low. 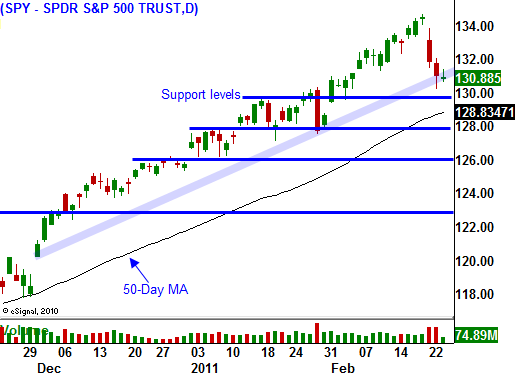