Concerns Have Subsided and Buyers Are Back. Expect Choppy Trading Next Week

Yesterday, the market tested the downside and it was able to bounce off of psychological support at SPY 130. There are many unresolved issues and next week is filled with major news events. We can expect choppy trading for the next two weeks.

Libya continues to grab the headlines. Gadhafi blames the revolt on the United States and Osama bin Laden. He claims we have been tainting milk with hallucinogens to spark rioting. He is clearly insane and we can expect more bloodshed before this is resolved. He has lost control throughout the country and rebels are converging on Tripoli. The Army is supporting protesters and the battle for power will begin in the next few days.

Saudi Arabia has increased production and that has stabilized oil prices. The greatest fear is that protests could spread to their country. Unlike Libya, oil money has filtered down to the people in the form of better education and health care. King Abdullah will initiate a $32 billion benefit package and that should reduce the tension. A protest is planned for March 11th and the world will be watching.

Higher oil prices are impacting inflation forecasts. The Bank of England and ECB have become more hawkish and there is a possibility that they might raise interest rates in coming months. The ECB will meet on March 3rd and their rhetoric could have a negative impact on the market.

Food prices have also been moving higher. In India, prices jumped 11% in one week and that was on top of a similar increase the week before. The Indian stock market declined 3% in one day on the news. High food and energy costs bite into discretionary spending when they stay elevated for an extended period of time. Our government likes to strip these volatile components out of their inflation models, assuming that the move is temporary. Last week, the CPI and PPI reflected higher core prices and that could be problematic.

Interest rates will start pushing higher in the near future. QE2 will end soon and the Fed has already come under so much criticism that they dare not suggest QE3. Next week, the Fed Chairman will be grilled when he delivers his Humphrey-Hawkins testimony before Congress. We can expect tough questions regarding our nation’s debt.

Next week, Congress will reconvene and they need to raise the debt ceiling or the government will shut down. The banter between both parties will escalate, but they will reach a compromise as they have for decades.

China’s PMI could be a real “fly in the ointment”. HSBC provided a flash reading for the first time ever and they project that PMI fell from 54.5 in January to 51.5 in February. If this holds true, it will be bearish for the market. Traders will wonder if China has strangled growth. They have raised bank reserve requirements eight times in the last year and they have raised interest rates twice this year. China is supposed to pull the world out of this recession and it is the key to a global recovery. This number could be particularly damaging to commodity stocks.

Next week will also be filled with major economic releases (ISM manufacturing, ADP employment, the Beige Book, ISM services, initial claims and the Unemployment Report). I am expecting decent news and the releases should have a positive bias. Last month’s Unemployment Report missed expectations and bad weather may have played a role. If that is the case, we can expect upward revisions to January’s number and a decent number in February. Yesterday’s initial jobless claims number fell below 400,000 and it was better than expected. Jobs are the key to this recovery.

This morning, GDP came in at 2.8% and that was lower than the first reading at 3.2%. This “miss” did not materially impact the market.

We are seeing a nice bounce this morning and some of the nervousness has subsided. There are enough cross-currents to keep the market within a trading range over the next week. Stock valuations are attractive and the market has a strong bid. On the other hand, investors will take profits on any nice rally after a 30% move in five months. Higher interest rates will keep a lid on this market for the next few weeks. 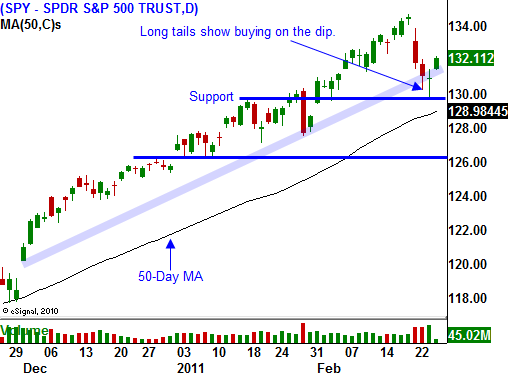