Stocks Will Try To Get Back To SPY 135. Resistance Will Build Throughout the Week

This is shaping up to be a very busy week. The market had jitters last week, but stocks were able to rebound. Earnings season has ended and the focus will shift to political and economic events this week.

Conditions in Libya are coming to a boil as protesters converge on Tripoli. Kadhafi is insane and we can expect bloodshed. According to reports, rebels are allowing oil shipments to continue and that might ease concerns. Saudi Arabia has also ramped up production.

Arab leaders are trying to get ahead of this movement. King Abdullah will spend $32 billion in benefits in Saudi Arabia and he has demanded that part-time workers be granted permanent employment. Protests broke out in Oman. They produce about 1% of the world’s oil and police fired teargas into crowds. The Sultan has ordered the hiring of 50,000 citizens in an effort to ease tensions. Oil prices remain elevated, but at least they have stopped going higher.

Tomorrow, China will release its PMI. If HSBC’s forecast is correct, it will drop to 51.5 from 54.5. China has been tightening aggressively and those measures are starting to take effect. This morning, the government reduced its growth forecast from 8% to 7% for 2011. The market seems content with this news and China says it wants quality growth. They also announced that they plan to build 36 million low-cost homes.

If economic activity in China decreases dramatically, it will send a shockwave around the world. Controlled growth might be good for China, but it will not be good for the rest of the world. We need current activity levels to be sustained and we will feel the effects of any slowdown.

India released its fiscal budget this morning and it contains a provision where food will be provided to the poor. Inflation has pushed prices sky high and the problem had to be addressed before protests break out. Government officials are concerned that this spending will greatly increase deficits.

Portugal is struggling with its deficits and it looks like they will require a bailout. Interest rates remain elevated and the need to auction €4 billion in each of the next three months. Even with the support of the ECB, these auctions are not likely to go well. Germany is digging its heels in and the policies and procedures of the new European financing facility are still being worked out. The ECB will meet this week and analysts are expecting hawkish statements.

Our budget is also a concern. Congress is trying to extend the debt ceiling temporarily so that a government shutdown can be avoided this week. Rumor has it that they are close to a short-term solution. The Tea party is placing greater pressure on the GOP and they want to see cuts.

The Fed Chairman will deliver his Humphrey-Hawkins testimony to Congress this week. He is likely get grilled when asked about our national debt level. I don’t see any positive coming from his statements. He will defend QE2 and I believe the opposition will squash any notions of QE3.

The economic news this week should be positive. ISM services and ISM manufacturing have been strong. ADP employment has outpaced the government’s jobs number and it should be strong as well. It measures employment by the private sector and it is heavily weighted towards small and medium-sized businesses. Last month, the Unemployment Report came in weaker than expected. Those numbers could be revised upwards since bad weather was to blame. The weather conditions have not improved much in February. If jobs don’t meet expectations, traders are likely to blame it on heavy snowfall again.

If Libya can get through this revolution without damage to his oil fields, energy prices will drop. Saudi Arabia’s oil production has increased and we could possibly have an oil surplus if Libya gets back online quickly.

The reaction to China’s slower growth was positive and a PMI of 51.5 might not cause too much concern.

The ECB meeting and Humphrey-Hawkins should cast a dark cloud, but it is not likely to spark a major sell off.

Stocks are moving higher this morning and the bid seems to be right back. I still believe that inflation and higher interest rates will provide a stiff head wind. The market should trade between SPY 130 and SPY 135 for the next few weeks while some of these issues get resolved. I would expect to see higher prices early in the week and some selling later in the week. Overall, the market will not move much from where it is now. 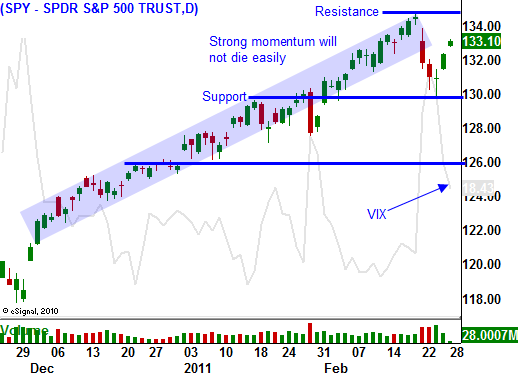