Yesterday, the market started the week off on a positive note. Stocks pushed higher the entire day and they closed near the highs of the day. This morning, some of those gains have evaporated and the downside is being tested. This is exactly the type of choppy price action I am expecting.

Overall, the news was good. China’s PMI declined to 52.2. That was slightly better than expected and it is still well above 50. The head a China’s top planning agency said that inflation is moderating. Their market is trading higher on both releases.

The manufacturing PMI in Europe rose to 59 from 57.3 and that was better than expected. The UK also posted a strong number. Manufacturing in the US also improved. ISM manufacturing rose to 61.4 from 60.8 in January. This was the best reading in seven years.

Chairman Bernanke is delivering his Humphrey-Hawkins testimony before Congress. He believes that the economy is in much better shape now than it was a year ago and positive employment trends are in place. Higher oil prices might have a negative influence on improving conditions. Inflation is creeping higher, but it is still within the target range.

Congress is trying to extend the debt ceiling before a government shutdown is forced. Republicans are using their leverage and they are demanding budget cuts. I believe they will find middle ground as they have for decades and a shut-down will be avoided

The ECB will meet on Thursday and given their hawkish statements, they could raise interest rates soon. The economic recovery in Europe is still fragile and this news will weigh on the market.

Tomorrow’s ADP employment number should be positive. It has exceeded estimates the last two months and it should provide a positive backdrop. Even if the number “misses”, bad weather will be blamed.

The news today was decent and the market decline should be relatively contained. Anytime Congress gets to grill the Fed, we can expect nervous trading. Stocks will move back and forth this week and we are likely to trade in a range.

With each passing day, the news from Libya will carry less weight. Gaddafi’s days are numbered. As long as the unrest does not spread, the market will deal with higher oil prices. By the end of the month, Saudi Arabia will be producing more oil. If the oil fields in Libya and Oman are not destroyed, we could see lower oil prices in a month. That would be bullish for the market and the timing would coincide with buying ahead of Q1 earnings season.

Look for choppy trading in March. The bid is strong and I still favor selling put credit spreads. I have not seen enough negative news or enough profit taking to justify selling call spreads. 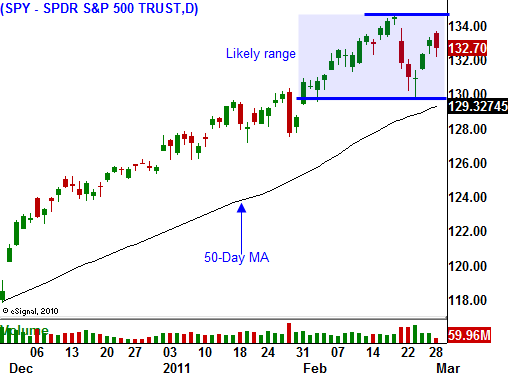