Yesterday the market sold off hard for the second time in two weeks. This comes off of a relative high and it signals heavy resistance. As I have been mentioning, the market will fall into a choppy trading range the next few weeks.

ISM manufacturing rose to its highest level in seven years. The 61.4 reading surpassed estimates. This morning, ADP employment grew by 217,000 jobs in February. This was much stronger than the 165,000 jobs analysts were expecting. ADP processes payrolls for small and medium sized businesses and their report provides insight on private sector employment. Their number has greatly exceeded the government’s release the prior two months.

Friday’s Unemployment Report should generate a positive reaction. If nonfarm payrolls come in below expectations (183,000), traders will blame heavy snowfall in February. January was a nasty weather month and we could see upward revisions to that month’s jobs number.

This afternoon, the Beige Book will be released. Given the robust economic releases, I expect to see signs of growth across the country. That could spark an afternoon rally.

Tomorrow, the ECB will meet. They are concerned about inflation and their comments have become more hawkish recently. If they hint about future rate hikes, the market will have a negative reaction. Brazil will decide tomorrow if they are going to raise interest rates. The combination of these two events could be negative.

ISM services should be strong tomorrow and initial claims should continue to decline. These two positives will offset some of the negative tone created by higher interest rates.

The revolt in Libya will continue, but the unrest has not spread as some feared it might. Conditions in Saudi Arabia and Oman are stable. Saudi Arabia has increased oil production and that will keep a lid on oil prices. If Libya’s oil fields are not destroyed, they could come back online quickly and oil prices would drop. This would be positive for the market and the timing could coincide with buying ahead of Q1 earnings season.

The market still has many cross currents and I’m expecting choppy trading in a range between SPY 130 – 135 for the next few weeks. Profit-taking has set in and we have a strong resistance level at the highs of the year. Asset Managers want to buy dips, but they do not want to chase stocks.

I am expecting a decent day today, softness tomorrow and a bounce Friday. It is almost impossible to predict daily price movements and the take away is that prices will oscillate back and forth. It is hard to trade against the upward momentum the last five months and I favor selling out of the money put credit spreads. I like commodity stocks and heavy equipment manufacturers that generate revenues in emerging markets. Distance yourself from the action and give yourself plenty of breathing room. 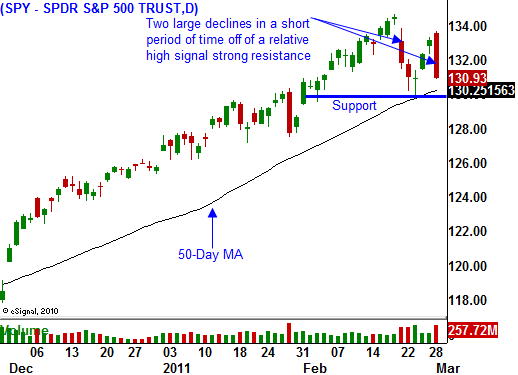