A Good Jobs Number Was Baked In After Yesterday’s Rally. The Market Needs Time to Gather Strength

The number did not disappoint and 192,000 jobs were added in February. Furthermore, 58,000 jobs were added to the December/January period. The unemployment rate dropped to 8.9%, the lowest in two years. Jobs are the key to a sustained economic recovery.

As I mentioned yesterday, the number would be good, but the reaction would be muted. All of the good news was baked in after a 25 point rally in the S&P 500. This morning, the futures are giving back some of those gains.

After a 30% rally in five months, the market needs to take a breather. There are unresolved issues that need to play out. Unrest in the Middle East needs to subside. Libya will be overthrown, but as long as the oil fields are not destroyed, production can resume without much delay. A protest is scheduled in Saudi Arabia on March 11th and I am not expecting a big turnout. Oil money has reached citizens in the form of education and health care. King Abdullah plans to spend another $32 billion in benefits. As the protests subside, oil prices will pull back. Saudi Arabia has already ramped up production and we could have a surplus if Libya comes back online sooner than expected. This will ease inflation concerns since oil is the fabric of every economy.

Yesterday, the ECB said that it might raise interest rates as early as April. They are concerned about inflation. In his Humphrey-Hawkins testimony, the Fed Chairman mentioned that high oil prices could impede our economic growth. A pullback in oil prices could be the catalyst for the next rally.

Portugal will need to be bailed out. Their interest rates have remained above 7% and they will hold large bond auctions during the next three months. In total, they need to raise approximately €12 billion. Like Ireland, they are reluctant to take the money because they don’t want fiscal reform shoved down their throats. The ECB will support these auctions, but that might not be enough to keep rates down.

This week, China’s PMI dropped and they lowered their growth expectations for 2011 down to 7% from 8%. Surprisingly, the market rejoiced. Traders somehow believe that the growth will be of higher quality. I’m not buying into that theory. The US needs China to grow as fast as possible so that this fragile economic recovery can continue. If their PMI drops below 50 in coming months, traders will sing a different tune.

These “unknowns” will be resolved in a matter of a month and they will give the market time to gather strength. Any decent pullback to SPY 130 will represent a buying opportunity. In April, traders will start buying stocks ahead of earnings season. This pattern has been strong during the last eight quarters.

Corporate profits have been incredible and they are up 35% year-over-year. The economic news has shown signs of strength in the last month and higher interest rates won’t be a problem as long as inflation remains low.

The news next week is fairly light and you should expect choppy trading. Overhead resistance at SPY 135 is formidable and support at SPY 130 is equally strong. The upward momentum during the last five months needs to be respected and I am selling out of the money put credit spreads (I don’t have the stones to sell out of the money call credit spreads although March positions make sense). Be patient and don’t chase stocks. Wait for a pullback and sell the spreads once support is established. Target strong stocks and sell the spreads below technical support. If the market does roll over, the stock’s technical support levels will provide extra protection and you will have more time to decide if you need to exit the trades. This is a great time to trade this strategy and you won’t have to sweat the day to day volatility. 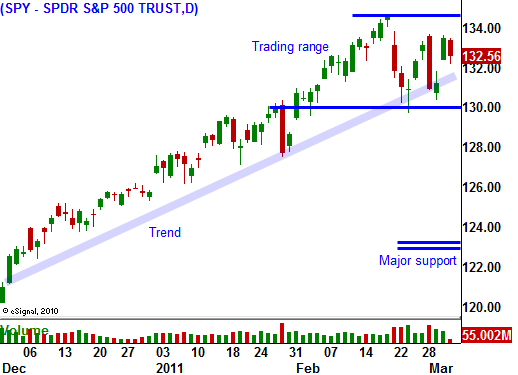