Stocks Should Gain Strength As The Week Unfolds

Last week, the domestic news was great, but global events prevented a rally. The market is choppy and it is likely to stay in a trading range between SPY 130 – 135 for the next few weeks. After a 30% run in five months, it needs time to gather strength.

Corporate profits grew 35% year-over-year and the S&P 500 is trading at a forward P/E of 13. Stocks are cheap and money will continue to flow out of bonds and into equities. The Fed Chairman painted a rosy picture when we delivered his Humphrey-Hawkins testimony before Congress last week. He did mention that high oil prices could impede economic growth. Over the weekend, Obama addressed that and he might tap into strategic oil reserves.

Credit concerns, a civil war in Libya and the threat of higher interest rates in Europe are keeping a lid on the market. Overnight, Greece’s credit rating was lowered. Interest rates in Ireland, Portugal and Spain are rising in sympathy. This Friday, the EU will meet and they want to determine policies for the new credit facility. Germany and France are pushing for fiscal reform. The PIIGS countries are resisting and they don’t want other countries dictating their policies.

In Libya, the Army is striking back and a civil war could last many months. If the oil fields are destroyed we can expect energy prices to jump. Saudi Arabia is pumping more oil and the world will be watching the protests in their country this Friday.

Last week, the ECB made hawkish statements and they said a rate hike could come as soon as April. They are more concerned with inflation than an economic recovery.

The market had an unexpected reaction to news from China last week. Their PMI fell and growth projections for 2011 were lowered to 7%. They have been raising bank reserves requirements and interest rates have been increased twice this year. Traders rationalized that the growth will be of higher quality (sustainable) and the market rallied on the news. China’s market has been in a downtrend and I believe this was just an oversold bounce. The world needs hyper-growth in China or this fragile recovery will stall. Tighter monetary policy might be good for China in the long run, but it is not good for global markets.

The economic and earnings news is light this week. The war in Libya and the EU meeting later in the week will be the focal points.

I believe stocks will be “heavy” early in the week and they will gain traction Thursday and Friday. Europe still has time to figure out its bailout structure and the market will cling to any signs of progress. The protests in Saudi Arabia will be subdued and that will take some of the pressure off of oil prices.

Asset Managers are eager to buy and the bid to the market will improve.

I am selling out of the money put credit spreads today and tomorrow. Look for strong stocks that have solid support levels and sell the spreads below technical support. The market will chop around the next few weeks while these issues are resolved. Commodity stocks, heavy equipment manufacturers and consumer discretionary stocks look attractive.

As we get into the first few weeks of April, I believe oil prices will pull back and the market will challenge the highs of the year as earnings season approaches. 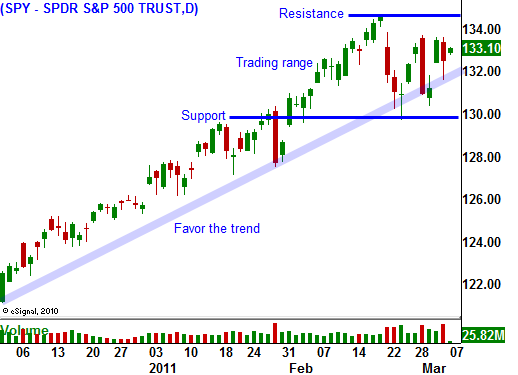