Yesterday, the market opened on the plus side and quickly reversed. By mid-morning, we were in a full-blown decline and higher oil prices were taking their toll. Late in the day, the bid returned and stocks were able to pare losses. This morning, the market is trading higher and we are right back where we started the week.

This is exactly the type of price action I have been forecasting. There are many unresolved issues and the market will chop back and forth within this trading range (SPY 130 -135) for a few weeks.

The conditions in Libya are tenuous. Traders expected a quick end to the conflict similar to what we saw in Egypt. Gaddafi has attacked rebel forces and the civil war will take longer to play out. That will keep upward pressure on oil prices. Later in the week, a protest in Saudi Arabia is planned. King Abdullah has shut down websites and the protests should be subdued. Oil money has filtered down to the citizens in the form of education and healthcare. The standard of living is higher in Saudi Arabia than it is in Libya and the King offered an additional $32 billion in benefits to his people. If the protests lack participation, oil prices will ease and the market will rally.

The conditions in Europe are mixed. PIIGS interest rates are moving higher, but Italy might agree to the bailout policies outlined by Germany. This would put pressure on other countries to accept the terms. The EU will meet Friday to discuss the policies for the new credit facility. If other nations agree to the structure, credit concerns will ease. The EU will be able to issue bonds and fund the new facility. Weaker nations will be able to borrow money at a lower cost. They will also be forced to balance their budgets.

I can see a scenario where weak nations like Greece, Ireland and Portugal refuse the terms and fend for themselves. This would be foolish on their part, but it could happen. The initial market reaction would be negative as the losses are taken, but it would be healthy for the EU in the long run. The strong would remain in the EU with fiscal guidelines and the PIIGS would stop weighing them down.

The economic news last week was fantastic. ISM manufacturing, ISM services and all of the employment reports showed steady improvement. This will provide a very positive backdrop for the market and Asset Managers will be buying dips.

All eyes will be on EU and Saudi Arabia this week. Even if EU can’t hammer out all of the details for the new credit facility, any progress will be viewed as a positive. Protests in Saudi Arabia won’t draw huge support and this will also be positive for the market.

I believe we will see choppy price action early in the week and we will see strength Thursday and Friday. I sold put credit spreads yesterday and I continue to do so today. That strategy has worked extremely well the last two weeks. I still favor the upside since we have strong momentum in that direction. Look for stocks that have posted excellent earnings and have a defined support level. Sell your spreads below that technical support. 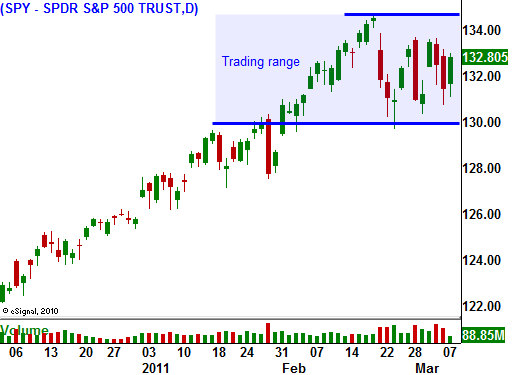