Yesterday, the market rebounded and it erased losses from Monday. This choppy back and forth action will continue throughout March and the market needs time to gather strength. After a 30% rally in five months, stocks look a little tired. Over the next few weeks traders will have more clarity and they will buy stocks ahead of Q1 earnings.

The conditions in Libya have not changed much over night. One of their major refineries had to be shut down because of fighting in the area. This civil war could drag on longer than expected. It is unlikely that protests will gain traction in Saudi Arabia this Friday. If this turns out to be a non-event, traders will breathe easier heading into the weekend.

The EU will hold a summit Friday to determine bail out policies. This needs to be finalized before they start raising funds for the new credit facility. Rumor has it that talks are not going well and PIIGS countries are resisting. There doesn’t have to be a solution this weekend, but the clock is ticking.

Portugal auctioned €1 billion in bonds and rates jumped from 4.1% during the last auction to 6% last night. The bid to cover also fell to 1.6. They are likely to need bail out money. If the EU can’t establish middle ground, the problem will fester until there is a major sovereign default. It is still a little too early for this to happen. The credit facility will calm nerves, but it won’t solve structural debt problems. These nations will continue their spending ways and the bailouts will be never-ending. Over time, Germany will be dragged down with the rest.

In the US, Congress is still trying to pass its budget. Currently, both parties are just working on short-term solutions that will buy them another month. The deadline is March 18th and time is running out. Both parties are so far apart that a longer-term solution is out of the question. The Tea Party will be watching newly elected representatives and they expect to see budget cuts.

Tomorrow, the Bank of England will meet to discuss interest rates. Their tone has been more hawkish, but a rate hike is not expected.

The market needs to consolidate gains over the next few weeks. That time will yield information about the issues that are currently casting a dark cloud over stocks.

In April, the focus will gradually turn to earnings season. Corporate profits were up 35% year-over-year and the S&P 500 is training at a forward P/E of 13. Stocks are cheap and strong economic releases will push the market higher in April.

For the time being, expect volatility. The market will continue to chop between SPY 130 -135. This is a good time to sell out of the money put credit spreads. By now, this concept should sound familiar. I have been touting it for the last 2 to 3 weeks. Focus on stocks that released strong earnings and have a defined support level. Sell your spreads below technical support and if that level fails, be prepared to buy them back in. If you focus on the stocks that consistently appear on the top of the Live Update table, you will be in good shape. 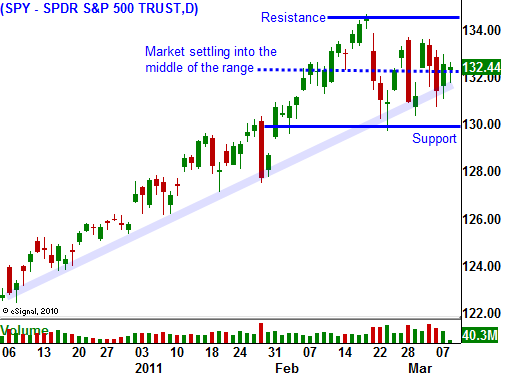