Many Questions and No Answers. China, the EU, Libya and Saudi Arabia Raise Concerns

Yesterday, the market did not move much, but they were some concerning changes. Commodity stocks have led this rally and they were particularly weak. This is a very overcrowded trade and we could see a swift, deep correction in these stocks.

Overnight, China posted its trade numbers. Surprisingly, it ran a deficit and both imports and exports declined. Traders will be concerned that China has over-tightened. I have been making light of this in my comments the last few days. The market shrugged off a weaker Chinese PMI last week and a reduction in their GDP forecast for 2011. Somehow, traders rationalize that the quality of growth would be better. A slowdown in China will hurt the global recovery no matter how you slice it. They are the growth engine that everyone is counting.

Overnight, Spain’s debt rating was lowered. This was not a major surprise, but it does turn up the heat during today’s EU meeting. They are trying to forge the policies that will govern future bailouts. Consensus is that they will not make any progress. PIIGS countries do not want to change and they do not want policy dictated by “Berlin”. Interest rates in Greece, Ireland, Portugal, Spain and Italy have been steadily moving higher.

Portugal auctioned €1 billion in bonds yesterday and interest rates jumped 200 basis points relative to the prior auction. The bid to cover also declined to 1.6. In all likelihood, they will need a bailout soon.

The EU is more hawkish and they might raise rates as soon as April. Today, the Bank of England is meeting and their rhetoric has also been more hawkish. They may not raise rates, but they are likely to lay the groundwork for a future rate hike.

Conditions in Libya have not changed much. It looks like a civil war will drag on. Yesterday, a major refinery was shut down and that will keep upward pressure on oil prices. A protest is planned in Saudi Arabia tomorrow. No one expects this to amount to much and that means any surprise would be negative for the market. Fear is creeping back and traders would rather be safe than sorry so they are selling stocks.

A bullish initial claims number could have softened the blow, but we didn’t get one. Last week, 397,000 new claims were filed and that was greater than expected. It is still below 400,000 and that is a positive sign.

This morning’s price action is concerning and we could see support at SPY 130 fail. If that happens, bullish speculators will get flushed out and the market will test SPY 126. After a 30% run in five months, no one should be surprised to see a swift correction.

I have been playing it relatively safe by selling out of the money put credit spreads. This morning, I am reeling them back in for a loss. I’ve had excellent profits over the last 6 months and I do not want to give that money back. I still believe that this market has one more good push higher left in it so I am not going to aggressively trade this decline. I might buy puts for a day or two, but I will have stops in place and I don’t plan on holding these positions long.

I will only take longer term bearish positions if there are many signs that China’s economy is slowing. I also need to see major technical support levels fail. Until that happens, I am going to assume that this is nothing more than a normal correction after a huge rally. This mindset keeps me in “buy the dip” mode as long as support holds. 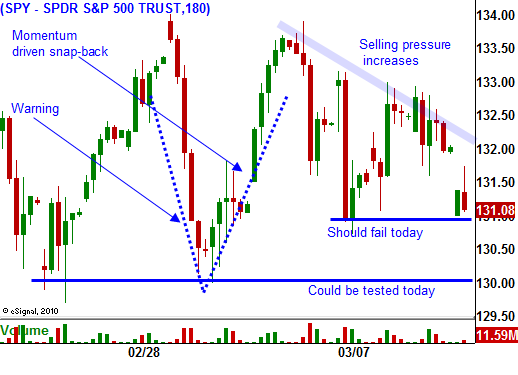