Yesterday, the market had a very ugly feel to it early and I suspected weakness throughout the day. First support at SPY 130 was tested and it held. Fear was elevated and a couple of negative news events sent investors to the exits.

The major news this morning is the devastating earthquake in Japan. It registered 8.9 on the Richter scale and it is the worst in 140 years. My heart goes out to all of the victims. From a financial standpoint, I am hearing that insurance losses could be in the $2 billion range (very manageable). The epicenter was deep and it was 250 miles offshore. Most of the damage was caused by the tsunami.

The Japanese government insures retail and commercial businesses and this catastrophe will cost billions. Their government is already stretched to the limits and this will just push their economy closer to the edge. For weeks, I have been telling you that Japan would be the source of a global credit crisis. If interest rates go from 1.25% to 2.5%, all of their tax revenues won’t even cover the interest expense on their national debt. It’s debt rating was recently lowered by S&P. Soon, Japan won’t be able to finance its debt domestically and it will have to seek funding from foreign sources.

The real catalyst to yesterday’s decline came from China. Their trade deficit was unexpected and traders are wondering if they have over-tightened. This reaction was much different than the one we saw last week. China’s PMI came in “soft” and growth projections for 2011 were lower at 8% to 7%. Strangely, traders embraced the notion that the growth would be of higher quality a week ago.

China is the growth engine for the entire world. A slowdown of any magnitude will impact the fragile recovery in Europe and the United States. Commodity stocks rolled over and the selling pressure was intense. This trade is very overcrowded and it reminds me of the decline we saw in 2007 after oil reached its peak. Bullish speculators need to be flushed out. Eventually, this decline will set up a fantastic buying opportunity.

Rebels in Libya are losing a little ground. This civil war could linger for many months. The protests in Saudi Arabia are expected to be light. Once this event passes, the market will breathe easier. There were simply too many dark clouds hanging over the market yesterday and traders decided to take profits.

The EU is meeting to forge the new bailout policies. Many speculate that a “watered down” solution will be proposed. France and Germany (the two strongest members) want to make sure fiscal restraints are in place before bailout money is granted. It is also rumored that Greece and Ireland might pay lower rates for current loans if they agree. I still believe there are many cultural differences that will impede progress and this will require many months of negotiations before an agreement is reached.

PIIGS interest rates are creeping higher and the clock is ticking. The terms and conditions for the new finance facility need to be hammered out. Yesterday, Spain’s debt rating was downgraded and Portugal’s bond auctions went horribly.

Domestically, Congress is trying to find a temporary solution to extend the debt ceiling. The deadline is next week and a government shutdown is at risk. I don’t believe a shutdown will happen. Unfortunately, they are even talking about a longer-term solution to our budget deficit nightmare.

I don’t see any major obstacles in all of the information above on a short-term basis. One bad number from China does not establish a trend. I still believe that economic growth will be strong. A small turnout for protests in Saudi Arabia will calm nerves and oil prices could pullback. A victory by either side in Libya would take pressure off of energy prices. Europe won’t reach an agreement, but progress will be made. Congress will find away to temporarily increase the debt ceiling and they will kick the can down the road.

The credit crisis in Europe will continue to fester, but it will not reach a boiling point for many months. The credit facility was embraced by foreign investors and they can keep this Ponzi scheme alive for another year or two.

I am sticking to my guns. I believe the market will be volatile within a trading range from SPY 130 – 135 and we will see strength in coming days as some of these issues are resolved. The news is fairly light next week and the CPI/PPI will be the focus (I am not expecting anything new from the FOMC). The numbers will come in a little “hot”, but the market will shoulder the news.

As April rolls around, we will see a rally into earnings season. Corporate profits will attract buyers and the market will have one final push higher. The current decline will set up a great buying opportunity.

Two-year bull markets die hard. I am on the sidelines waiting to buy calls. First, SPY 130 needs to hold. If it does not, SPY 126 will get tested. I don’t see us falling below that level and a probe down to that area will be short and sweet with a quick rebound if it happens.

Look to sell put spreads and buy calls once support is established. 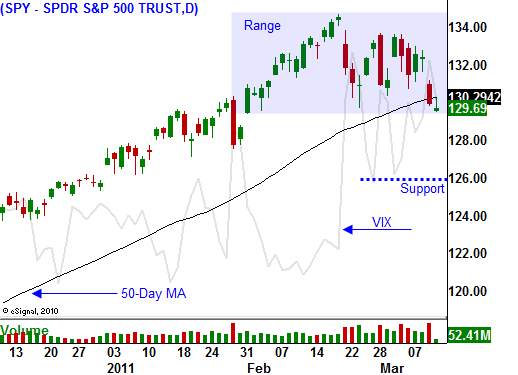