This morning, panic selling has hit global markets. Japan’s nuclear crisis has worsened and citizens within a 13 mile radius of the plant have been evacuated. The country is suffering from massive destruction and the aftershocks continue. Factories across the mainland have been shut down for inspection. Investors fear that this natural disaster could topple a fragile recovery in the world’s third largest economy.

From what I am reading, the nuclear fallout has been contained. This is not like Chernobyl in the 1980s where they did not have a containment chamber. The evacuations are a safety precaution and the levels are elevated, but they are still equivalent to an x-ray. These comments are easy for me to make when I’m sitting 12,000 miles away in the safety of my office.

My heart goes out to the men, women and children of Japan who have had to survive one of the biggest earthquakes in a century, a massive tsunami and now a nuclear crisis. Millions are without food, water and electricity.

From a trading standpoint, the nuclear incident does not justify the market decline we are currently seeing. As a child, I can remember all of the films we watched in school that instructed us to crawl under our desks in the event of a nuclear attack. Baby boomers have been taught to fear radiation and I am horrified to hear of a massive evacuation related to this silent killer. Imagine the fear in a country that has lived through a nuclear attack.

If this market decline is panic induced because of the nuclear incident, the reaction is overblown. I believe that to be the case in we are likely to see a snap back rally.

On the other hand, if the market decline is related to Japan’s fragile fiscal condition, the selloff could be justified. Their national debt is already at perilous levels in this crisis could easily cost $200 billion. Furthermore, economic activity will come to a standstill and that will reduce tax receipts. This aspect of the earthquake presents much greater financial risk than the nuclear crisis.

Bullish sentiment was at extremely high levels and speculators needed to be flushed out. Once the market broke technical support, bulls bailed out of positions. Now that the “fluff” is out on the market, we could see a nice rebound.

In the last two weeks, other global events have been weighing on the market. Most of them have been resolved.

In Libya, Gaddafi is regaining control. This is not what we want to see from a humanitarian perspective, but oil prices will stabilize. The protests in Saudi Arabia did not gain traction and the unrest is not spreading. Energy prices are falling and that will reduce inflationary pressures. The Fed Chairman mentioned that higher oil prices could temper our economic growth and now that concern should subside.

The EU found middle ground with its members over the weekend when they structured the guidelines for the new credit facility. PIIGS countries will pay lower interest rates on current loans and future bailout money will only be granted if austerity measures are followed. Global markets embraced the idea of a credit facility and European credit concerns will subside.

Congress will temporarily extend the debt ceiling this week avoiding a government shutdown. They will stop grandstanding and they will work on the budget for 2011.

In coming weeks, conditions will stabilize and the market will rebound into earnings season. Earnings are strong and US economic conditions are improving. While Japan’s disaster will hurt activity in the short run, the rebuild will boost long term activity. The market won’t worry about Japan’s dangerous debt levels until bond auctions go poorly in the distant future.

DON’T CATCH A FALLING KNIFE! As I told you yesterday, be patient. Wait for an intraday reversal off of a deep decline. That could come today or it might not. I also mentioned that any test of SPY 126 would be fast and furious. So far that level has held.

It is possible that the nuclear crisis in Japan worsens and we have another strong leg down. I believe that support at SPY 123 will hold firm.

There is a buying opportunity in here somewhere, but it is too early to tell where that is. Here is a helpful technical lesson.

On a steep decline (stock or market), don’t buy on the way down. It is critical to identify the source of the weakness and you must determine if this is a temporary condition or the start of a longer term move. If it is temporary, wait for support. The first move is to sell out of the money puts. The option implied volatility will be high and there is a nice edge to this trade. Next, watch the bounce. There will usually be a retest of support. If it fails, you were early on your put sale and you need to buy the options back. If support holds and the stock is able to rebound above the highs established by the first bounce, you have bona fide support. On the second move, you can consider buying calls if the option premiums have declined. Use this strategy as we look for signs of support.

I WOULD NOT SHORT THE MARKET. I BELIEVE THIS WILL BE A BUYING OPPORTUNITY. 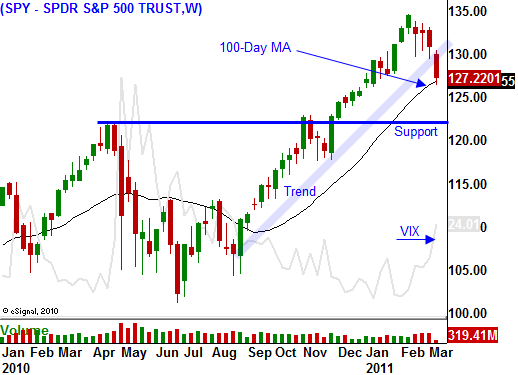