Yesterday, the market tanked on the open when conditions in Japan appeared dire. Global markets where weak and support at SPY 126 was tested immediately. Throughout the course of the day, stocks gradually clawed their way back.

The nuclear crisis in Japan has not deteriorated overnight. Officials seem to have better control over the situation and radiation levels have declined. Workers were evacuated for a few hours, but they have been brought back in.

It is important to understand the magnitude of the situation. Sensors automatically injected boron rods into the reactor vessel 90 seconds after the earthquake. That immediately reduced the power of the nuclear reactions to 3% of their original level. This residual 3% is what they are trying to control. I believe the market has overreacted to the nuclear aspect of this natural disaster.

From an economic standpoint, Japan’s economy will suffer in the short term, but the reconstruction will add to long-term activity. The economic impact will all even out over time. The government is deeply in debt and the earthquake/tsunami will cost $200 billion. Japan is one of our largest lenders and they will not be buying US Treasuries. They have to finance reconstruction. Lower demand for US Treasuries means US interest rates will rise.

Yesterday, the FOMC released its statement. Some of the negative statements have been removed and they see a “firmer footing” with gradually improving labor conditions. QE2 is ending and this will also put upward pressure on US interest rates.

This morning, the PPI came in very hot. The core rose .2% which was in line with expectations. Food prices skyrocketed 3.9% last month, the highest spike in 36 years. The overall number climbed 1.6%, double the .8% previously month. The longer food and energy prices stay elevated, the greater the impact on discretionary spending. Inflation will also put upward pressure on interest rates and tomorrow, the CPI will be released.

Portugal’s debt rating was lowered by two notches. Most analysts expect a bailout and this should not weigh on the market. Fortunately, the EU made progress last week and they are closer to finalizing the policies for the new credit facility. The ECB will aggressively back Portuguese bond auctions and they have some major ones coming up in the next two months. Portugal will soon be “under wing” and traders will shift the focus to Spain. This is a much bigger problem since it represents 12% EU’s GDP. They are too big to bail and too big to fail. For at least a few months, the credit crisis in Europe will not be a concern.

Gaddafi is winning the battle in Libya and he states that this war will be over in 48 hours. The protests in Saudi Arabia did not amount to much and now their troops are defending the monarchy in Bahrain. It appears that this wave of unrest will end and energy prices will eventually return to normal.

As expected, Congress passed a three week budget extension and there will not be a government shutdown. A harsh tone has been set and both parties realize that they need to get the budget approved.

The market hit a pocket of uncertainty and profit-taking set in. Bullish speculators were flushed out and this will set up an excellent buying opportunity. The market will still have some jitters, but Asset Managers are eager to buy stocks. I believe the market will form support and rally in coming days. As earnings season approaches, the bid to the market will grow.

With rising interest rates and inflation issues on the horizon, I am cautious heading into May. I’m not worried about that now because this market has at least one good rally left. This bull market will die-hard and it will take a series of events to get it to roll over.

Start selling out of the money put spreads and know that you are early. That means the positions are likely to take a little heat. As long as you distance yourself from the action and sell below support, you will have plenty of room to weather the aftershocks. Option premiums are elevated and there is a nice edge to this trade. 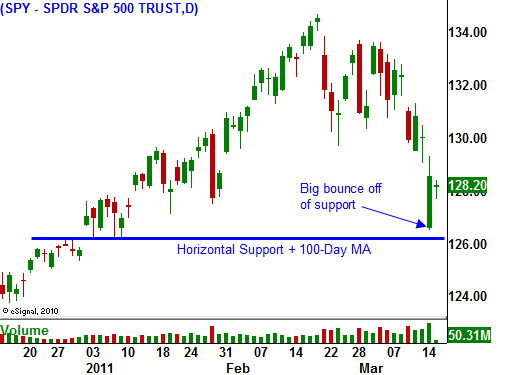