Sell Out of the Money Puts Spreads – Great Opportunity!

The market is not out of the woods by any means, but we are getting a nice bounce this morning. Sharp declines of this magnitude establish support and they bounce. The rebound lasts a few days and eventually that support level is tested. If the market closes below SPY 126, there will be more selling. On the other hand, if buyers come in ahead of that support, it is a sign of strength.

I believe this decline will present a buying opportunity. During the initial stages, you must spread. Option implied volatilities have spiked and you won’t make much money if you buy calls. When conditions stabilize in a couple of weeks, premiums will decline and option buying will be viable.

Yesterday I outlined all of the issues that are getting resolved. Unrest in the Middle East will subside, the EU established policies for the new credit facility and Congress will extend the debt ceiling. Energy prices and credit fears will decline.

The situation in Japan is dire. From an economic standpoint, activity will decrease in the short run, but the reconstruction will fuel longer-term growth. A powerline to the nuclear plant should be available today and that will cool the reactors. This should prevent a meltdown. With each passing day, Japan is able to allocate more resources to the problem and the likelihood of a solution increases. If this crisis is resolved, we will see a huge relief rally.

Bullish sentiment was off the charts a few weeks ago and we were due for a correction. Speculators bailed out of long positions and that added to the selling pressure. The market was nervous before the earthquake and this event pushed it over the edge.

This week, the FOMC removed negative comments from its statement. It sees improving employment conditions and in their view, companies are no longer “reluctant to hire”. This morning’s initial jobless claims number is consistent with that line of thought. Only 385,000 new claims were filed last week and the four-week moving average is declining.

The CPI rose .5% in February, but the core was only up .2%. This was a decent number and inflation is not a major threat at this time. If conditions in the Middle East settled down, oil prices will decline and that will also bring the PPI/CPI back to earlier levels. Oil prices have been driven up by the threat of disruption, not demand. Saudi Arabia has increased production and when Libya comes back online, we could have a surplus.

I still expect to see nervous trading over the next few weeks. This rally feels nice, but we will not be “off to the races”. Sell out of the money put credit spreads on strong stocks and distance yourself from the action. This strategy will also benefit from declining option implied volatilities.

Know that additional selling is likely and you will be in the right frame of mind. Your positions could take a little heat, but if you sell puts on the stocks that are at the top of the Live Update table you will be in good shape. I am looking at the top 15 as I write this and I like them all. Sell the put spreads below technical support. If that level is breached, get out. This is a great trading opportunity, go make some money!

The Live Update table is only available to subscribers of the Daily Report. Sign-up before Sunday March 20th and save 25%. 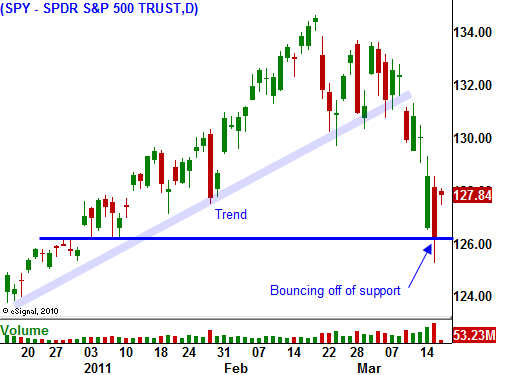