Yesterday, the market rebounded and it was able to hold most of the gains throughout the day. The issues weighing on the market are being resolved one by one.

Conditions in Japan are stabilizing. Power lines will restore electricity to the plant and this will help to cool the reactors. It may take weeks before they return to normal levels. Once the situation is under control, the entire nuclear facility might be buried in concrete to prevent future leaks. Any improvement in the situation will spark a rally.

From an economic standpoint, current activity will decline. The market should be focused on the future reconstruction and the temporary disruption has already been priced in.

The G7 announced that they will intervene to stabilize the yen. Japan will be able to raise the money it needs to start rebuilding. Its citizens are strong and I admire their compassion and fortitude. Thousands patiently wait in line for food and water without any fighting. Japan is unified and they will draw strength from each other.

In Libya, conditions have changed. The United Nations authorized military strikes against Gaddafi and he has authorized a cease-fire. First, he threatened to shoot down Mediterranean passenger planes. He wisely reconsidered. Conditions in Libya should stabilize and I expect the unrest in the entire region to settle down.

Next week, the EU will meet to finalize its policies for future bailouts. Member nations reached an agreement last week and the credit facility is starting to take shape. This will not solve long-term structural debt problems, but it will temporarily ease credit concerns.

Congress temporarily extended the debt ceiling and now they will focus on the budget for 2011. The heat is on and the grandstanding should be over. Both parties know that compromise lies ahead. The “can” will get kicked down the road as it has for decades and the Tea Party will not be happy.

Next week, the economic news is fairly light. Durable goods orders are extremely volatile and they are taken with a grain of salt. This will be the final revision for Q4 GDP and I am not expecting any big surprises. Initial claims should continue to improve.

Japan, conflict in the Middle East and the EU meeting will be the focal points. I am expecting improvement on all fronts. The market is still on tenuous footing and as I’ve been saying for weeks, I expect to see choppy price action. I am selling put credit spreads with the idea that support at SPY 126 could be tested again. Option implied volatilities have declined in the last day, but they are still elevated and premium selling strategies have a nice edge. Commodity stocks and cyclicals are performing well.

This is a quadruple witch and we are likely to see some price swings today. Distance yourself from the action and focus on strong stocks that are consistently rising to the top of the Live Update table.

The Live Update table is only available to subscribers of the Daily Report. Sign-up before Sunday March 20th and save 25%. 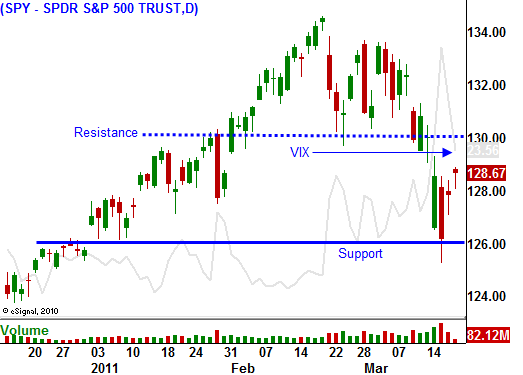