Relief Rally Feels Nice – Expect Choppy Trading – Not All of the News Is Good!

The news over the weekend has been positive. Japan has restored power to its damaged nuclear plant. The containment chambers and water pumps are holding. United Nations forces bombed Libya and Gaddafi’s compound was hit. Protests in Bahrain have been suppressed and they never gained momentum in Saudi Arabia. These major events plagued the market last week.

Conditions in Japan are still dire. Traces of radiation have been found in milk and spinach. The levels are minute and they did not present a health threat. To put this into perspective, water near the plant contains 1/26th of the level generated by an x-ray. Nissan will resume production in five of its plants and the recovery process is starting. We should still expect negative news events from this catastrophe and it will take years to rebuild Japan.

From a humanitarian standpoint, conditions in Libya have improved. Rebels now have a fighting chance for democracy. From an economic standpoint, the UN’s airstrike lengthens the war and that will keep oil prices high. Saudi Arabia has increased production and that will help the situation.

A big merger was also announced over the weekend. AT&T is buying T-Mobile for $39 billion. This is a huge takeover and telecom stocks are up on the news.

There are a couple of negative news items to deal with. China raised its bank reserve requirements by 50 basis points this weekend. It is the third move this year and analysts did not expect it. They have raised interest rates twice this year and after the PMI fell a few weeks ago, most traders felt they would wait before tightening again. China also lowered its growth forecast from 8% to 7% in 2011 a few weeks ago. They are slamming on the brakes and this will impact global economies.

Wednesday, Portugal will vote on austerity measures. The parliament plans to reject the proposal and the Prime Minister is prepared to resign if that happens. This will force Portugal into a bailout situation. The market is already prepared for this, but the actual event could weigh on an already nervous market. Once this happens, the focus will immediately shift to Spain. It is too big to fail and too big to bail. The EU had better formalize its bailout policies this week when they meet because the heat will get turned up very quickly.

The S&P 500 is up 15 points this morning. I have been expecting a bounce, but there are enough issues to keep a lid on this rally. Stocks are likely to swing back and forth the rest of the month and a retest of SPY 126 should not come as a surprise.

Last week, some of the tech “darlings” were nailed hard. Bullish speculators are getting flushed out and there are nice trading opportunities. Look for strong companies that posted excellent earnings and are still in a long-term uptrend. Identify major support levels and sell put credit spreads below those price points.

The economic news this week is fairly light. This is the final revision or Q4 GDP and I am not expecting any surprises. Durable goods orders are volatile and traders take the number with a grain of salt. Initial claims have been improving and that number could provide nice support for the market.

The rally this morning feels nice, but the market will hit resistance at SPY 130. There are still plenty of dark clouds and we could see the highs of the day established early this morning. We have been busy selling put credit spreads the last 3 days and I am content holding current positions. I don’t trust the “all clear” rally this morning and I will wait for follow through before I take on more risk. Energy and agriculture still look attractive.
. 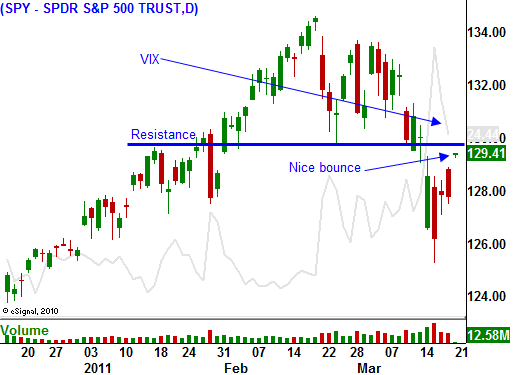