Yesterday, the market rallied on encouraging news from Japan. Power was restored to the damaged nuclear power plant and the core was being cooled. Officials report improving conditions, but some of the equipment needs to be repaired. A nuclear meltdown was feared and a relief rally pushed stocks up to resistance at SPY 130 on the news. This is the extent of the “bounce” I was looking for.

As I mentioned in last week’s comments, moves of this magnitude establish a low and option implied volatilities explode. Next, support is established and the market bounces. During this stage, selling out of the money put credit spreads is very effective. These positions benefit from a collapse in option premiums. Once this relief rally stalls, sellers will probe for support. They want to test the bid and the market will often pull back to the recent low. The price action during that retest will determine what happens next.

The bounce has stalled and we are likely to see selling pressure the rest of the week. The S&P 500 is down four points in early trading. A nuclear catastrophe has been averted, but many other dark clouds still hover over the market.

As Japan recovers, the extent of the damage will be revealed. Many components are manufactured in the devastated areas and this will affect supply chains for many global manufacturers. The cost of reconstruction could exceed $200 billion and Japan is already deeply in debt. It will need to raise capital at a time when Europe and the US are competing for funds.

Europe is trying to finalize its bailout policies this week. Strong EU members were able to find middle ground with weaker members and we will know if an agreement can be reached in a few days. Stronger countries like Finland will have to pay more into the bailout fund and there is a growing anti-EU movement in that country. This is the most highly educated country in the world and they do not want to pay for Greece’s careless ways. With so many different cultures and political philosophies, I believe the agreement will be watered down and tested soon.

Portugal will vote on austerity measures this week and their parliament is prepared to reject the proposal. The Prime Minister has already threatened to resign if this happens. In his view, this is a last-ditch effort to rein in rising costs. A rejection would almost certainly result in a bailout situation. The market has already priced this in and it will put even more pressure on the EU this week. Once Portugal is under wing, the focus will immediately shift to the 800 pound gorilla in the room (Spain).

Inflation in the UK rose 4.4% (CPI) in February. ECB officials are signaling that a rate hike is likely in April. This will provide a stiff head wind for the market.

Over the weekend, China raised its bank reserve requirements by 50 basis points. This came as a surprise since they lowered 2011 growth forecasts to 7% two weeks ago. China’s PMI also declined in February and many analysts thought that the tightening would be over after two rate increases and three bank reserved requirement increases this year. These moves might be in China’s best interest, but any slowdown in their economy will have global consequences.

The war in Libya will drag on and that will keep oil prices high for many months. We have stopped a massacre, but the rebels are untrained and ill-equipped. NATO is divided on how to proceed. The US already suffers from battle fatigue and we do not want to spearhead another conflict. We can expect the battles in Libya continue for many months, you can’t negotiate with the madman.

The market bounce was nice, but as I mentioned yesterday, we are not going to race higher. There are still many looming issues that need to be resolved. Earnings season is still weeks away and the market is likely to drift back down to SPY 126. If buyers come in strong at that level, the market will rebound and push through SPY 130 in mid-April. If the market easily falls to that support and it is breached, we will see another round of selling.

I won’t know which of the two scenarios will play out until I see the price action, but my gut tells me that we will see SPY 126 hold and then we will get a rally into earnings. By late April, it will be time to exit bullish positions and take a more bearish “sell in May and go away” posture.

For today, I would stay relatively quiet. I see weakness in retail and there are some credit spreading opportunities. Look at the stocks near the top of the Live Update table. I also like buying out of the money calendar spreads in energy and agriculture. Buy May calls and sell April calls with the same strike price. April option expiration is early and the April calls will expire before earnings. That will leave you with the May calls at a good price. Even if the market pulls back, these stocks should hold up well given the unrest in Libya and the upcoming driving season. 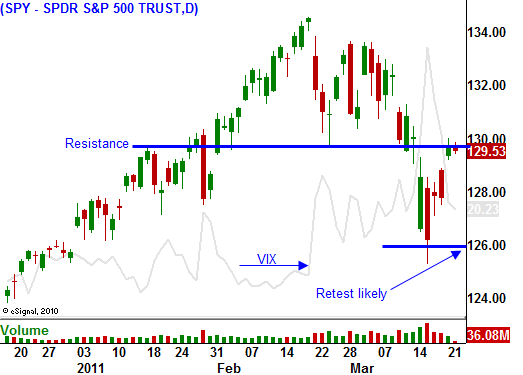