Not much has changed overnight. Yesterday, the market spent the day digesting news. The action was lackluster and stocks had a slightly negative tone as the SPY bumped up against resistance at 130. The first wave of the storm has passed, but dark clouds still linger.

Overnight, Japan assessed the damage from the earthquake. They estimate reconstruction costs could exceed $300 billion. Their government is already deeply in debt and their credit rating was lowered last month by Standard & Poor’s. The world will rally around this crisis and they will support bond auctions initially. A year from now, the appetite for Japanese debt is likely to wane.

Conditions at the nuclear plant continue to improve. Reactor cores and containment chambers are stabilizing now that power has been restored. Radiation levels around the plant are elevated, but bearable. Now that a nuclear crisis has been avoided, the future for this energy source is not as dark. In a year or two, this close call will be forgotten.

The battles in Libya continue. American led airstrikes prevented a massacre, but rebel troops are ill-equipped and poorly trained. Intervention will be needed for them to succeed. Both political parties are angered by our involvement and Obama’s support is declining. The US is battle fatigued and we do not want to enter another war. This revolt will linger for many months and that will keep upward pressure on oil prices.

The earthquake in Japan will reduce oil consumption by 1 million barrels per day and that will give Saudi Arabia time to ramp up production.

Today, Portugal will vote on austerity measures. The parliament has already stated that they will reject the proposal and the Prime Minister said he will resign if this happens. If these events play out, Portugal will need a bailout. This puts more pressure on the EU to finalize its bailout policies this week. If they fail to do so, the market will get nervous.

The Peoples Bank of China said they are comfortable with current interest rates. That should come as a relief given the hike in bank reserve requirements over the weekend. That move was not expected after growth forecasts for 2011 were lowered and the PMI declined in February. China’s growth story must remain intact for the global economic recovery to continue.

Durable goods orders, initial claims and the final revision to Q4 GDP will be released this week. I am not expecting any major surprises.

There are still many unresolved issues and the market is likely to retest SPY 126 in the next week. If that support level attracts buyers and we spend a minimal amount of time retesting, the market will rally ahead of April earnings season. On the other hand, if the market easily falls to 126 and support fails, we will see more selling.

I believe stocks still have one good rally left in them before QE2 ends. I like buying May out of the money calls and selling April calls with the same strike price. April option expiration is early and earnings season will just be kicking off. Front month options will expire, leaving us with the May calls at a great price. Buy calendar spreads on energy and agricultural stocks. Alternatively, keep your powder dry and wait for the pullback. Once support has been established, buy calls. Option implied volatilities have declined enough to make this strategy viable again. 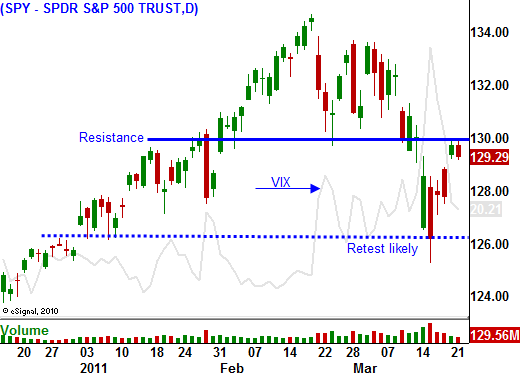