Portugal Will Need A Bailout – Pressure On EU Turned Up – Look For A Decline!

This week, the market staged a relief rally when a nuclear meltdown in Japan was avoided. The country was devastated by the earthquake and widespread radiation would have spread chaos to a much larger region. Power has been restored to the plant and reactors are being cooled.

Radiation levels are elevated in food and water, but they are declining. Reconstruction could cost Japan $300 billion. It is deeply in debt and this crisis will push it closer to default. If interest rates in Japan rise from 1.25% to 2.5%, total tax receipts won’t cover annual interest expense. Standard & Poor’s downgraded their bonds a month ago and they were treading on thin ice before the earthquake. In the early stages, the world will support the cause, but I suspect the demand for Japanese bonds will wane in future months.

Japanese citizens supply 93% of the nation’s financing needs and this credit crisis has flown under the radar. They also purchase US Treasuries because the yield is higher. Japan holds 10% of our debt and in an act of patriotism, citizens will favor its nation’s bonds so that the reconstruction can begin. This means the demand for US Treasuries and demand for the newly established Eurobond will decline.

EU officials are meeting this week and they hope to finalize the bailout policies for the new credit facility. Discussions last week seemed to be moving in the right direction, but members are reluctant to sign off on the proposal. Strong countries like Finland and Germany are demanding austerity. These countries are being asked to contribute more to the fund since they are in a stronger financial position. An anti-EU movement has started because they don’t want to finance countries that have no fiscal restraint. In exchange for their support, stronger members also want Ireland to raise its corporate tax rate so that the playing field is level. Ireland has refused to do so. I doubt the EU will reach an agreement this week or in the near future.

PIIGS nations can’t control their spending. Last night, Portugal failed to approve austerity measures and the Prime Minister resigned. This was a last ditch effort to try and solve its own problems. Now they will certainly need to be bailed out. I am shocked that the market has not had a negative reaction to the news. A bailout was priced into the market, but stocks are moving higher after the news.

Once Portugal comes under wing, the focus will quickly shift to the 800 pound gorilla in the room. Spain has an unemployment rate about 20% and Moody’s just downgraded 30 Spanish banks. This country accounts for 12% of the EU’s GDP and is too big to bail and too big to fail.

The heat has been turned up on the EU to formalize its bailout policies. If they can’t reach an agreement, the new credit facility will fail and the financial crisis will grow quickly. The concept of a centralized financing facility was widely accepted by investors and it helped to ease credit concerns during the last four months. The dark cloud hanging over the market temporarily parted and stocks rallied.

HSBC released its “flash reading” on China’s PMI this morning. It showed a slight increase to 52.5. If the official number comes out “hot” next week, China might be tempted to raise rates again. An official from the Peoples Bank of China said that they are content with the current interest rate. They have tightened dramatically in 2011 and just this week they raised bank reserve requirements for the third time by 50 basis points. This move was not expected by the market. Any slowdown in China will have global consequences.

On our economic front, durable goods orders fell .9% and that was weaker than expected. This is a volatile number and it will not have a lasting impact on the market. Initial jobless claims declined by 5000 and that was in line with expectations. Tomorrow’s GDP number is the final revision for Q4 and I am not expecting any surprises. Next week, the economic news will heat up and consumer confidence, ADP employment, initial claims, Chicago PMI, ISM manufacturing and the Unemployment Report will be released. These releases should be “market friendly”.

As part of a NATO alliance, we bombed Libya and now no one wants to take the ball from us. Germany has completely backed way and they are not even attending council meetings. We are left holding the bad and Obama’s support is fading fast. Rebels are untrained and ill-equipped. The war will wage on and oil prices will stay elevated.

The lack of a bailout agreement in Europe will fester and I believe we will see a pullback to support at SPY 126. We will bounce off of that level and the focus will temporarily shift to earnings in April. We will get a nice rally into the middle of April and it will stall. Inflation will bite into profit margins and we won’t see follow through.

Late in April, it will be time to take a more defensive posture. The Euro credit situation will escalate and Spain will come into focus. Inflation will climb and the ECB will raise rates. The US will pass a budget and the cuts won’t satisfy the Tea Party. QE2 will end and the war in Libya will become our problem. China’s economy will decline and traders won’t know if it is due to over-tightening or the earthquake. Sell in May and go away.

For today, I do not trust this rally and I believe we will see a decline heading into the weekend. I have been calling for a pullback to SPY 126 and that move will begin now that resistance at SPY 130 has been tested. I like selling call credit spreads on the stocks at the top of the Live Update table today and I am even buying a few puts. 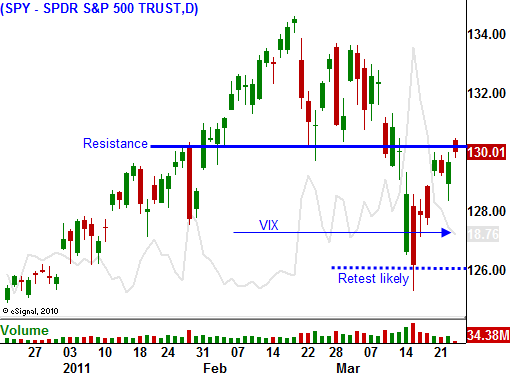