Issues Still Loom – Look For Weakness Late In the Day and Early Next Week.

The market showed some resiliency yesterday when it rallied through resistance at SPY 130 after a round of negative news. Stocks continued to grind higher throughout the day, closing on the highs.

Portugal did not pass the austerity proposal and the Prime Minister resigned. This will almost certainly lead to a bailout. EU leaders are trying to agree on bailout policies but there is dissension among member countries. Strong countries are being asked to contribute more to the bailout. They want assurances that strict austerity measures will be taken before bailout money is granted. Additionally, they want Ireland to raise its corporate tax rate so that the competitive playing field in Europe is level. PIIGS countries want existing borrowing rates lower and they want access to lower rates in the future.

Germany and Finland (two strong members) are holding political elections in the next few days and they won’t commit to anything at this critical moment. These bailouts are a source of tension and anti-EU protests are emerging. Prudent, hard-working societies don’t want to finance countries that spend recklessly, especially when they don’t plan on changing their ways. Portugal had to cut spending and they didn’t want to. Politicians lacked the courage needed to make tough decisions.

Next week, we will learn what if any progress was made. Interest rates in Portugal are spiking and this problem will heat up very quickly. Once Portugal receives financial aid, the focus will quickly shift to Spain.

The ECB will meet in two weeks and a rate hike is expected. This will also put pressure on the market. QE2 will end in two months and that will put upward pressure on US interest rates.

Japan does not feel it can finance the $300 billion needed for reconstruction through new bond offerings. It realizes its current indebtedness is already near a tipping point. They were going to lower corporate taxes and that no longer seems possible. Japan plans to make substantial spending cuts and to reallocate those savings to the disaster. The third largest economy in the world is painted into a corner after decades of reckless spending.

The nuclear plant situation took a turn for the worse. Two workers waded into water at the plant and were burned after receiving 10,000 times the normal radiation level. A breach is suspected and contamination levels could be much higher than expected.

Overnight, good earnings from Oracle and Accenture were offset by disappointing results from RIMM. Earnings season will officially start on April 11th, but the major releases won’t begin until the middle of the month. Profits should be excellent, but rising costs will bite into margins and the guidance could be cautious given the situation in Japan.

Major economic releases are slated for next week. They include ADP employment, initial claims, ISM manufacturing and the Unemployment Report. Consensus estimates are for 225,000 new jobs in March. The news should be “market friendly”.

There are still many unresolved issues and this rally is fragile. I believe credit worries in Europe will spark selling early next week. This decline won’t pack the same punch as the one we saw two weeks ago. Watch for support above the SPY 126 level and use this dip as a buying opportunity. Stocks should perform well ahead of earnings season and that momentum will continue through most of April.

I have been selling call credit spreads on weak stocks that have not been able to rally. I am also buying out of the money call calendar spreads (sell April calls and buy May calls with the same strike price) on strong stocks. In both cases, I am selling April options. This market will continue to chop around for the next few weeks and I want to take advantage of time decay.

Look for quiet trading today. If the market can’t advance by mid-day, expect profit taking late in the day. The EU decision will keep traders on edge. 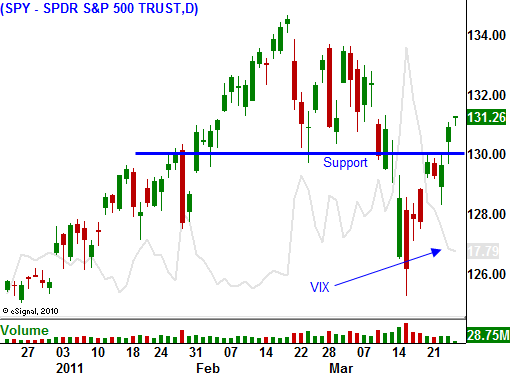