Japan, the ECB and the Middle East Should Keep A Lid On The Market. Major Econ Releases This Week

Last week, the market was able to break out above SPY 130 and that momentum is pushing stocks higher this morning. There are many unresolved issues that could weigh on the market. For the time being, bulls are ignoring the warning signs.

Conditions in Japan worsened over the weekend. Experts fear that there may have been a breach since radiation levels in a holding tank are extremely high. Food and water contamination are the primary concerns and a crisis could impact a large population.

Japan’s debt level is enormous and the government does not feel it can finance the $300 billion reconstruction with new bond offerings. It was going to lower corporate taxes and now it will need that revenue. Spending cuts will also be reallocated to the disaster. Japan’s has painted itself into a corner.

ECB is preparing a new credit facility for Europe’s ailing banks. It is specifically designed for Ireland and the recent stress test will reveal a €20 billion hole that needs to be filled. The EU did not make progress on the policies for the bailout facility. Major elections were held in Germany/Finland and politicians were noncommittal ahead of voting.

Portugal’s debt was downgraded last week and their interest rates are spiking. When they did not pass an austerity plan last week, the Prime Minister resigned. They will need a bailout in the immediate future and the EU will have to work quickly to forge policies.

Conditions in Libya are shifting back in favor of the rebels. They have taken back control of the East and they might be able to market oil through Qatar. If they can finance their army, they can win. We still don’t know what the ruling body might look like after this conflict ends. Tonight, President Obama will address the nation and he will explain our role. Unrest in Syria is escalating and protests in the Middle East are far from over.

We are heading into the next US budget deadline (April 8) and Republicans insist they will not support another temporary bill. This means we could see a government shutdown.

Next week, the ECB will meet and analysts are expecting a rate hike. That will put upward pressure on global interest rates.

This week will be filled with major economic releases (consumer confidence, ADP employment, initial claims, Chicago PMI, ISM manufacturing and the Unemployment Report). I am expecting a positive reaction to the releases, but good news is priced into the market.

The market has shouldered all of the uncertainty well. Any of the issues described above could take a turn and spark a wave of selling.

I am selling out of the money call credit spreads on weak stocks. I am also buying call calendar spreads on strong stocks. If the market chops around for a few weeks, the April options will expire. I will be left with May calls at a very low price (almost free) heading into earnings season. This is a fairly neutral strategy but it does nave a slightly negative bias for a couple of weeks. 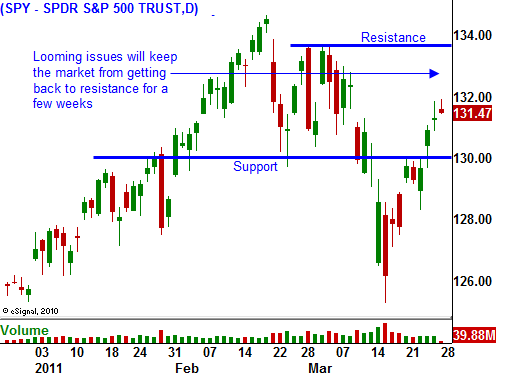