Bullish and Bearish Cross-currents – Support At APY 130 Will Be Tested Today.

Yesterday, the market tried to add to last week’s rally. Stocks ignored all of the “worries of the world” and the SPY broke through resistance at 130. Near the closing bell, a wave of selling stripped away gains and the market closed in negative territory. This is kind of nervous trading I expect to see this week.

The heavy dose of economic news will generally be positive for the market. Initial jobless claims have been dropping in on a weekly basis and that bodes well for ADP employment on Wednesday and the Unemployment Report on Friday. Analysts are expecting the government to report 225,000 new jobs for the month of March. Employment is the key to a sustained recovery. Chicago PMI and ISM manufacturing will also be released this week. Manufacturing has been strong and both numbers should be “market friendly”.

End of month/beginning of the month fund buying will also support the market later in the week. Earnings season officially kicks off in two weeks and stocks have a tendency to rally ahead of the news. These positive influences will be neutralized by other events.

First, let’s start with the domestic issues. A number of companies have provided cautious guidance and analyst estimates are very optimistic. Inflation on the wholesale level could hurt profit margins and producers are not able to raise prices. Nike might have been a harbinger of what’s to come. QE2 is almost over and this will put upward pressure on interest rates. Furthermore, we face a potential government shut down if Congress can get a budget approved in the next week. Stocks will have a headwind from here on in.

On a global basis, Japan, China, the Middle East and Europe all have issues. Japan is trying to contain a nuclear crisis and a breach might have occurred. Radiation levels in the plant are extremely high. The country is buried in debt and it will not be able to fund construction simply by issuing more bonds. This natural disaster could cost more than $300 billion. Planned tax cuts will be postponed and budget cuts will be made so that money can be reallocated reconstruction. Japan will be pushed to its financial limits this year. They have been active participants in US/Euro bond auctions and this disaster will have a ripple effect on global debt markets.

China continues to slam on the brakes. It is trying control inflation and escalating real estate prices. They have raised bank reserve requirements three times this year and they have hiked interest rates twice. Rumor has it they might be considering another interest rate hike next month. Any economic decline in China will impact the rest of the world.

Libya could be at war for a long time. NATO neutralized Gadhafi’s army, but the rebels are untrained and poorly equipped. Unrest has spread to Syria and the entire Middle East is filled with protests. Oil prices will stay high for months to come.

The EU was not able to reach an agreement on bailout policies. Strong members want to enforce strict austerity measures on countries needing financial aid. As we saw in Portugal last week, these countries don’t want to change their ways. In a last ditch effort, the Prime Minister drafted an austerity plan to help it avoid a financial crisis. Politicians rejected the plan and the Prime Minister resigned. Weaker nations want interest rates lowered on current loans and they want competitive rates on future loans. Stronger nations are holding elections and an anti-EU movement has started. The heat will get turned up in coming months. Once Portugal receives financial aid, the focus will quickly shift to Spain.

Next week, the ECB will meet. Analysts are expecting a rate hike and this will put upward pressure on our interest rates.

I believe we will see choppy price action for the next few weeks. Good economic releases are expected and the market will try to rally on the news, but longer term issues will limit the rally.
A possible government shutdown in the US, higher interest rates in Europe/China, a possible nuclear breach in Japan and unrest in the Middle East could easily spark a sell-off.

I have been expecting a market pullback and I believe we might get one today. Support at SPY 130 should hold, but if it does not, the selling pressure will intensify late in the day. 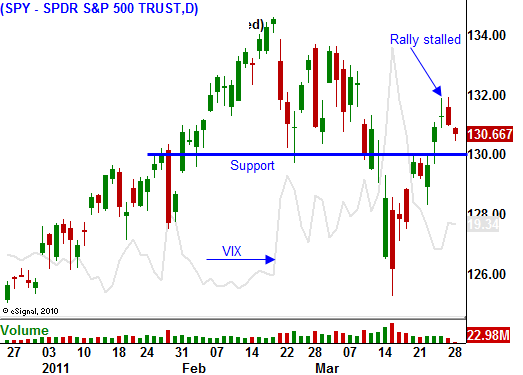