Tomorrow, Chicago PMI will be released. Manufacturing has rebounded sharply and a robust number of 70 is expected. ISM manufacturing will be released Friday and consensus estimates are for 61.4. This matches last month’s reading and it was the highest in 17 years. The expectations are high and as long as the numbers come close, the market will continue to grind higher. If manufacturing misses estimates, we will see profit-taking.

There are plenty of issues that could spoil the rally. Domestically, Republicans and Democrats are trying to agree on a budget before April 8th. Both parties have stated that there will not be another temporary extension. Sen. Dick Durbin said negotiations remain in “bad shape”. According to Politico, White House Democrats fear a shutdown is inevitable. QE2 will conclude in a couple of months and that will put upward pressure on interest rates.

On the global front, higher interest rates will provide a stiff head wind. China has raised rates twice this year and traders fear that another hike is just around the corner. Any slowdown in China will have a material impact on other economies. The ECB will meet on April 7th and analysts believe they will raise interest rates. We are seeing signs of economic growth and it is time for interest rates to move higher. Governments have artificially suppressed them to stimulate activity and that assistance is no longer needed. Rising interest rates are not a problem if accompanied by economic growth. It simply means that the market will no longer be in the “sweet spot” and the easy money has been made.

The EU will have its feet put to the fire in the next few months. Strong members are backing weak countries and the battle lines are drawn. Germany and Finland don’t want to throw good money after bad and they want policies in place that force fiscal responsibility. They know that the EU is stronger together and that banks/sovereigns have considerable investments in PIIGS countries. A series of defaults would be financially disastrous. By the same token, they don’t want to fund reckless spending. Credit crisis concerns will start heating up soon. Portugal will need a bailout and Spain will quickly get moved to the front burner. Once a major nation becomes the focus, the entire game will change.

The devastation in Japan will also take its toll on global economies. The country is so indebted that they cannot finance reconstruction with new debt. If they could, this event would be simulative in the long run as new money is used to rebuild. The reality is that corporate tax cuts will be postponed and budget cuts will be required to free up money for the reconstruction. Money will be reallocated, not created. There will be some new bond offerings, but that poses another problem. Japan has been a big purchaser of US/Euro bonds and now it will be focusing on its own needs.

Conditions in the Middle East are volatile. Conflict has spread to Syria and the entire region is filled with protests. Energy prices will stay elevated for an extended period of time. High oil prices will impede economic growth and they will bite into profit margins.

End of month fund buying, positive economic releases and the approach of Q1 earnings season will keep a bid to this market. However, given the issues above, a quick pullback could come at any time. As long as the SPY is able to hold support at 130, buy on dips. We are likely to rally into earnings season and stall late in April. Corporations will give cautious guidance and they will blame the earthquake and high energy prices. Interest rates will push higher and that will provide stiff resistance.

I still like buying call calendar spreads on energy and agriculture stocks. The fundamentals are strong and I like being long May calls heading into earnings and growing/driving season. If my April calls go in the money, I will reel them back in. I want to buy calls on a pullback, but given the strength of the market, I don’t know if we will get one. Calendar spreads will help me put some chips on the table without taking much risk. If we do get a pullback and SPY 130 holds, I will buy calls.

Look for a positive bias this week. The economic news will be positive, but it will not provide a “pop”. Strong employment and manufacturing numbers will simply support the current momentum. 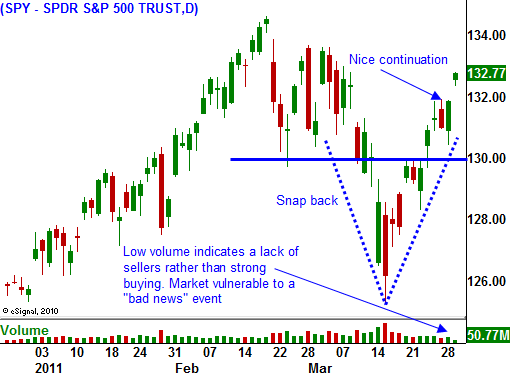