Look For Lackluster Trading Next Week – The Upward Momentum Will Wane

Yesterday, the market gapped higher and it was able to hold the gains. The momentum is strong and traders have been able to shrug off negative news. Amazingly, we are one strong day away from challenging the highs of the year. I don’t believe that will happen in the next week.

Good economic news is already priced into the market and a strong Unemployment Report tomorrow is expected. Initial claims declined last week and Chicago PMI came in better than expected. Yesterday, ADP employment was strong and it showed private-sector job growth. After each of these releases, the market did not shoot higher. Positive economic news is simply allowing the momentum to carry stocks higher.

End of month/beginning of the month fund buying will provide support, but resistance at SPY 134 will build. I believe the market will be relatively flat for the next week and then it will try to break out just after April expiration.

Interest rates will provide a stiff head wind next week. The ECB will hike interest rates and traders will dissect Trichet’s comments. Eurozone CPI rose 2.6% and this hotter than expected number all but guarantees a rate hike. China has a two day holiday and traders believe they will use this window to raise rates. Any slowdown in China’s economy would be bearish.

Tonight, China will release its PMI. This could be the biggest “driver” for the stock market tomorrow. Traders will be trying to gauge the impact of monetary tightening and the earthquake in Japan. I believe it is too early to see an impact from Japan and most of the weakness should be attributed to tightening. This news item could create a negative backdrop for tomorrow’s open if the PMI is materially below consensus estimates of 54.6.

The bank stress tests in Ireland will be released next Thursday and traders are projecting a €25 billion hole that needs to be plugged. The EU is still haggling over bailout policies and the clock is ticking. Portugal will need a bailout and Spain will get moved to the front burner in the next month.

Rumor has it that Congress will be able to get its budget approved. The compromise will trim $33 billion in spending. Out of a budget of $3.7 trillion, it takes weeks of compromise to cut less than 1% of our expenses. Our budget deficit will be over $1 trillion through 2011 and the best Congress could do is to trim $33 billion. We will never see another budget surplus in our lifetimes (there have only been four in the last four decades). Politicians are a complete joke and no one of them has the balls to tackle Social Security or Medicare/Medicaid.

These events are not going to spoil this rally. In fact, after a brief rest, I believe the market could challenge the highs of the year and break out. That move is likely to stall late in April.

By May, current issues will have festered and I believe the market will be ripe for a decline. Interest rates will move higher, high oil prices will bite into discretionary spending and corporate profit margins, QE2 will end and the EU will not be able to firm up bailout policies.

I am still buying call calendar spreads on strong stocks. The market should be range bound for the next two weeks and the April calls will expire. After April expiration, I am expecting a move higher as major earnings are released. By that time, I will be left with May call options at a great price. I will simply have to manage profits. The VIX has declined dramatically and this environment favors option buying.

A good Unemployment Report tomorrow will likely be negated by a soft Chinese PMI. Next week, look for range bound trading with nervousness ahead of the ECB decision on April 7. 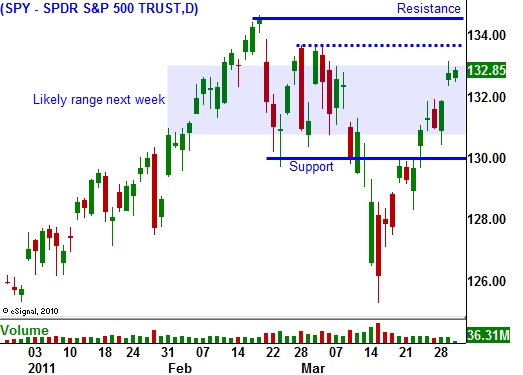