The market continues to push higher on positive economic news. This morning, the government reported that 216,000 new jobs were created in March. That was better than consensus estimates, but the market was already higher before the news was released. This event added a couple of points to the S&P 500. ISM manufacturing came in at 61.2 and although it was a strong reading, it was below estimates. Positive economic news is already priced into the market.

The tone was set overseas when China reported its PMI came in at 53.4. That was slightly below estimates, but still a positive number given the earthquake in Japan. I still believe it is too early to see the impact from that disaster. India reported a PMI of 57.9, the highest in four months.

The market is trying to push higher, but is bumping up against technical resistance. Interest rates are on the rise and traders fear that China will raise rates during the two-day holiday next week. Analysts already expect the ECB to raise rates when they meet on April 7. Quantitative easing will end in the US in a couple of months and that will also put upward pressure on interest rates domestically. The market will have to deal with a headwind that it has not had in two years.

The bailout policies in Europe will eventually weigh on the market if EU members are not able to reach an agreement. This is not an immediate threat (next 2 to 3 weeks), but it will be an issue in May. Portugal will need a bailout and Spain is waiting in the wings. Also, distressed banks have used all of the ECB’s emergency funds and they are borrowing from investment banks through repos. This is a potentially dangerous situation and it is a sign of trouble.

The news next week will be very light. China has a two-day holiday and that will subdue trading activity. ISM services will be released Monday and that is the biggest piece of economic news next week. I’m expecting a positive number, but that is already priced into the market. Earnings season will kick off April 11th and corporations have entered the “quiet period”.

Beginning of the month fund buying will settle down next week and ECB meeting will be the highlight. Technical resistance and nervousness ahead of their comments will keep a lid on the market. After next week, we could see stocks break out to a new high.

I have been buying call calendar spreads and they are working out beautifully. Many stocks have rallied up to the April strike price and I may have to close the positions out for a profit if the market breaks out. The spreads will lose money if I let the stock go deep in the money. If stocks stall next week, time premium decay will kick in and these positions will really perform well. I still like this strategy during the next two weeks.

Look for a tight trading range next week. The market will consolidate and gather steam ahead of earnings season. 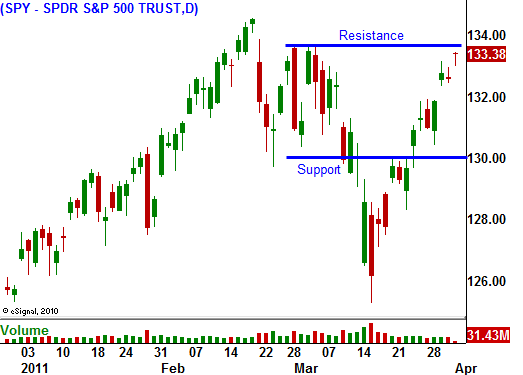