Quiet Week Ahead – Resistance Will Hold. ECB and 2011 Budget In Focus

Trading activity will be soft but next few days. The market has nice upward momentum, but I do not believe it will be able to break out to a new high this week. There are a number of issues that will keep resistance intact.

The radiation leak in Japan is worse than expected and material is leaking through a cement crack in one of the reactors. It could take months to stabilize the facility. The country will have to make massive budget cuts so that it can reallocate money to the $300 billion reconstruction effort. This historic earthquake could have a lasting negative impact on the world’s third-largest economy.

China is celebrating a holiday this week and their market is closed today and tomorrow. Many traders feel they will raise interest rates now so the market has time to digest the news. Last week, they reported a decent PMI and growth was not impacted by monetary tightening or the earthquake. I believe it will take another month for these events to have an effect.

The ECB will meet on April 7. Traders are already pricing in a rate hike and they will closely monitor the statements. This event won’t cause a major selloff, but it will weigh on the market. The Bank of England will also release a statement, but no action is expected. They are likely to deliver hawkish comments since they are concerned with inflation.

Oil prices continue to move higher. Add Yemen and Nigeria to the list of counties with unrest. The conflict in Libya will continue in it appears our NATO allies don’t have the firepower we expected. We removed military assets and they now have the reins.

Congress will be battling this week to approve the 2011 budget. If they can’t come to an agreement, a government shutdown will result. Republicans want to put pressure on Democrats. As soon as this budget gets approved, they will start working on the 2012 budget and the GOP wants to cut $4 trillion over the next decade. Medicare will be a major issue.

The credit crisis in Europe will fester, but it won’t be an issue this week. The EU has still not agreed on bailout policies and Portugal will soon be in need of financial aid.

These issues will all weigh on the market during an otherwise quiet week. As earnings season begins next week, stocks will rally. The strongest companies post their results in the first two weeks and the price action is typically very positive. The market is likely to make a new two-year high in the process. As we get towards the end of April, I will be taking profits on bullish positions.

I have been buying calendar spreads on strong stocks. Those positions are performing beautifully and when the April options expire, I will be left with May calls at a great price.

I will not be adding to positions this week unless the market pulls back. If it does, I will be purchasing May calls. Focus on stocks that are at the top of the Live Update Table and are breaking out to a new 20-day high. 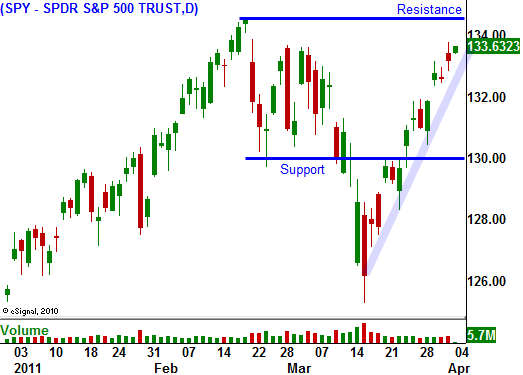