Overnight News Should Weigh On the Market This Afternoon

As I mentioned yesterday, this is a quiet news week and trading activity will be lackluster. I believe resistance at SPY 135 will hold and stocks will gather strength for a rally next week.

The big overnight news came from China. As many speculated, they raised rates by a quarter-point. This is the third hike this year and they have raised bank reserve requirements three times in 2011. China is slamming on the brakes and any slowdown will impact global economies.

Japan’s services PMI fell 14 points in March. The earthquake will have a devastating impact on its economy and that ripple effect will spread in coming months. Japan’s government will have to cut spending so that it can allocate savings to the reconstruction effort. Its credit rating was recently reduced and the country can’t shoulder $300 billion in new debt.

Portugal’s largest banks have threatened to stop buying government bonds and they are urging the government to seek a short-term loan from the EU/IMF until June elections. Monday, Moody’s downgraded Portugal’s debt. It will need a bailout and the EU still has not been able to agree on the policies for the new credit facility. The heat will be turned up in coming months and Spain will become the next concern.

This will be a busy week for credit markets. The ECB, BOE and BOJ will make monetary decisions. The market has already priced in a rate hike by the ECB. The comments will be scrutinized and traders will try to determine if another rate hike looms in the near future. Rhetoric out of England has also been more hawkish and they might signal a rate hike at the next meeting. This news should weigh on the market this week.

Congress is battling to get a budget passed. If they fail to do so this week, it will result in a government shutdown. Out of $3.7 trillion, they are fighting over cuts that represent less than 1% of the budget. As soon as this budget is passed, they will be working on the 2012 budget. Republicans want to cut $4 trillion in spending over the next decade and Medicare has a giant bull’s-eye on his back.

This morning, ISM services fell to 57.5 from 59.5. This is still a strong number, but the decline was not expected.

All things considered, the market is holding up surprisingly well. I believe that will change overnight when China’s markets reopen. They won’t like the rate hike and that weakness should spill over to our market tomorrow morning.

On a short-term basis, earnings season will provide a nice boost. Stocks typically rally during the first two weeks of releases. After that, I believe we could see trouble. Corporations will be very cautious with their guidance. Higher input costs, supply disruptions from Japan and the ripple effect from the earthquake will add uncertainty.

As May approaches, credit issues in Europe will become a concern. The EU is divided and strong countries don’t want to bailout weak countries if they are not going to address structural debt problems. By the same token, PIIGS don’t want policy dictated by “Berlin”. They know the strong countries have substantial investments in weaker nations and they are being defiant.

I am holding onto my call calendar spreads. When the April calls expire, I will only be long the May calls. As earnings season kicks off, I will look to take profits on these positions. I don’t want to overstay my welcome. If we get a pullback to SPY 131 this week, I will purchase May calls.

Stick with the stocks at the top of the Live Update table that have broken out and you’ll be in good shape. 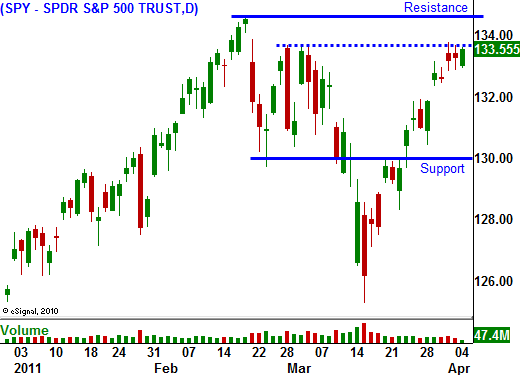