Stocks have been in a very tight trading range the last few days. The economic news is light, corporations are in their “quiet period” ahead of earnings and China was on holiday. The activity should pick up a little heading into next week.

I expected overnight markets to be “soft” this morning after China raised interest rates a quarter point. That was not the case in their market was up 1%. Traders rationalize that this might mark the end of their tightening. I don’t agree.

Their economy has not shown any signs of weakness and the rate hikes have come over a short period of time. If they were near the end, the time between increases would be longer. The earthquake in Japan will slow China’s economic growth and traders will wonder if that is a function of over tightening or supply disruptions next month. Any decline in China’s economy will be felt around the world.

Tomorrow, we will hear from the ECB, BOE and the BOJ. A rate hike in Europe is priced into the market, but traders will be looking for signs of another hike when they release their statement. I believe the ECB will be cautious. They don’t want to topple this fragile recovery and the market will be happy with their statements. The Bank of England will be hawkish and they will signal a future rate hike. This is already built into the market. Stocks have continued to push higher and the market will quickly look past the tightening.

Congress is haggling over a few billion dollars out of a $3.7 trillion budget and the process is ridiculous. If Republicans think the Tea Party is going to be pleased with their efforts, they are wrong. They should get the budget passed (fiscal 2011 ends in September) and draw a line in the sand for 2012. Republicans are proposing to cut $4 trillion in spending over the next 10 years, including a Medicare overhaul. This would be a step in the right direction. Social Security also needs reform.

Portugal is trying to secure financing from the ECB/IMF. It held an overnight bond auction and the bid to cover was 2.3. Yields jumped from 3% last time to 5.1%. They don’t want to reduce spending and they voted down an austerity plan two weeks ago.

The EU has not been able to agree on the policies for the new credit facility and this will be an issue in coming weeks. Like Greece, Ireland and Portugal, Spain insists that it will not need a bailout. It is the 800 pound gorilla in the room and as soon as Portugal is “under wing”, they will get moved to the front burner.

Same-store retail sales will be released tomorrow. They should be pretty decent and ANF’s raised guidance could be an indicator of good demand. Luxury stores will do better and home furnishings will struggle considering the earnings from LEN and KBH.

I was expecting a quiet week with a small pullback today and tomorrow. It doesn’t look like we will get an opportunity to buy calls ahead of next week. I am pleased with my call calendar spread positions. They are performing well and in some cases I might need to buy back the April calls if the stocks cross the strike price.

The price action should be positive next week as Alcoa kicks off earnings season Monday. Traders will wait for the reaction to tomorrow’s central bank statements before they aggressively buy stocks. I don’t believe we will break through resistance at SPY 135 this week. If you don’t have a position, buy calls on a dip. If you don’t get a chance to do that and stocks grind higher, buy calls on a breakout above SPY 135. Focus on stocks that are breaking out to new relative highs that are at the top of the Live Update table. 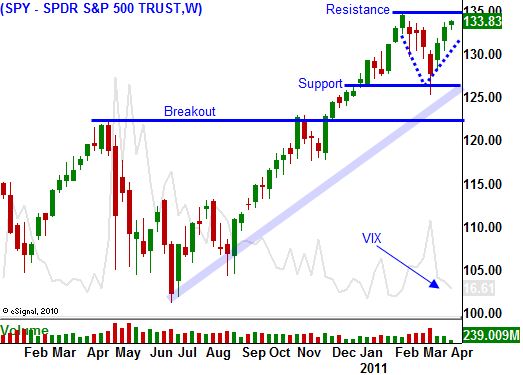