Resistance Will Hold Through Friday – Breakout Next Week.

This has been a quiet news week and the price action has been lackluster. China celebrated a two-day holiday this week, the economic releases have been light and corporations have entered their “quiet period” ahead of earnings season. Resistance at the highs of the year is holding, but it will be challenged next week.

On Monday, Alcoa kicks off earnings season. It won’t have much of an impact and with the exception of Google on Thursday, the releases are minimal. The big announcements won’t come for another week. Stocks have historically rallied into the beginning of earnings season and some of the strongest companies in the S&P 500 report early.

The expectations are high and the market is trading at a low forward P/E of 13. The SPY will break out to new highs and financial stocks should lead the way. They have been strong recently and improving employment should reduce write-downs. By the end of April, I am expecting the rally to stall.

Comps will be harder to beat since the economic recovery was well underway a year ago. Input prices are rising and that will bite into profit margins. Supply disruptions after Japan’s earthquake will also cloud Q2 guidance. Companies will error on the side of caution the lack of transparency will spook investors. Sell in May and go away.

Overnight, the ECB raised interest rates by .25%. Most analysts believe that another 2 to 3 rate hikes by the ECB are in store for 2011. The BOE did not raise rates, but their statements have been more hawkish. China also raised rates this week by .25%. This is the third rate hike in 2011 and the progressive action tells me they are not finished.

China subsidizes fuel costs and they are raising gasoline prices by 25%. This will dramatically bite into discretionary spending since a large part of the population’s income is spent on fuel.

In a month, China’s PMI will decline. Traders won’t know if this is the result of over tightening or demand disruption from Japan. Regardless, any slowdown in China will weigh on global economies. This will also play out in May.

Portugal is asking the ECB for a bailout. It will need approximately $100 billion in aid. Just a few months ago, they insisted a bailout would not be needed. This tune should sound familiar since it was played by Greece and Ireland last year. Spain is waiting in the wings and they insist that their fiscal house in order. The ECB has not reached an agreement on bailout policies. Strong countries and weak countries are battling it out. The heat is getting turned up and credit concerns will be an issue in May if the EU can’t reach an agreement.

Austerity is also a concern in the US. Congress is trying to pass a budget today so that a government shutdown can be avoided. Out of a $3.7 trillion budget, we can’t trim a measly $33 billion. The Tea Party is not remotely pleased. Republicans should just sign off since fiscal 2011 ends in September. The real battle lines need to be drawn in a month when the 2012 budget process begins. Republicans are proposing massive changes to Medicare and they want to reduce spending by $4 trillion over the next 10 years.

We might see a brief government shutdown, but both parties will reach an agreement. The market will lean on strong earnings and this should not spoil the rally. When 2012 budget talks begin in May, both sides will be miles apart. This will weight on the market.

This morning, initial jobless claims fell 10,000 and that was in line with expectations. Same-store retail sales were good and that is also providing a boost to the market. There are a number of smaller economic releases next week, but the focus will be on the Beige Book, PPI and CPI. Food and energy prices have remained elevated for an extended period of time and eventually they will hurt discretionary spending.

I believe the highs of the year will hold this week. However, earnings season optimism will generate a breakout above SPY 135 next week. Ride the wave and focus on stocks that are at the top of the Live Update table. Buy calls on stocks that are breaking out to new highs on heavy volume. Set targets and plan on taking profits late in the April. As long as the momentum continues, stay the course. When the rally stalls, get out. 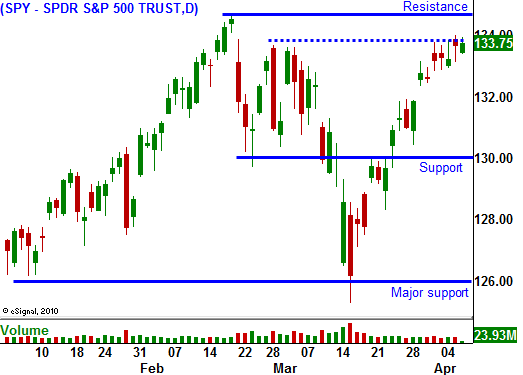