Wait For Support – SPY 130 Should Hold. This Is A Call Buying Opportunity!

The market has been caught in a very tight trading range the last 10 days. Momentum has stalled and stocks have not been able to break through resistance at SPY 134. Sellers will probe for a bid this week and once support is established, and earnings rally will push the market to a new relative high.

I expected a pullback before the final leg of this rally and we are getting it today. Many of the same negative stories that have been circulating for a few weeks are creating tension ahead of earnings releases.

The biggest driver this morning comes from Japan. I’ve been mentioning that radiation leaks are worse than expected and this morning, the nuclear crisis has been elevated to level 7. That puts this on par with Chernobyl. Officials state that conditions are stabilizing, but we have heard that before. I read that the largest cement mixer in the world is being shipped to Japan. This might be a precaution or it could mean that the entire facility is going to be encased like Chernobyl.

Japan is deeply in debt and this crisis will push it closer to the tipping point. I still believe that it will be the source of a global credit crisis.

China continues to purchase Spanish bonds and that has eased credit concerns. Now that Portugal has requested bailout funds, the focus will quickly shift to one of the largest economies in the EU. Spain has a 20% unemployment rate and it has defaulted more than a dozen times in the last two centuries. This is not a particularly good track record and a bailout would weaken the entire EU.

The UK reported a big decline in retail sales and Germany reported higher-than-expected inflation. This set a negative tone in Europe.

Earnings season officially kicked off and Alcoa beat estimates by a penny. Revenues were fairly light but the company stood by its projections that global aluminum demand would grow 12% this year. I thought the earnings were decent, but the stock is trading lower. This morning, Goldman Sachs lowered its estimates for Morgan Stanley from $.80 to $.36. It cites light trading revenues as a potential problem. We will see if the estimates are correct when J.P. Morgan releases earnings on Wednesday.

I believe banks will perform well this quarter. Financials and tech need to lead this rally if it is going to break out. The reaction to JP Morgan’s earnings tomorrow will indicate the strength of this final push higher. If the market likes the number, the breakout will be substantial and the SPY might make it up to 140. If the reaction is muted, we are likely to poke through and quickly fall back. I’m not concerned about the “knee jerk” reaction; I will take my cue from the stock’s performance into Friday’s close.

I was starting to get a little nervous with some of my call calendar spreads, but now I have plenty of room. The April options will expire and I own May calls at a great price heading into earnings season. I hope you used this strategy. If not, you will get a second chance.

The pullback today will set up a great buying opportunity. Option premiums are cheap and you should buy May calls. I believe we will find support at SPY 130. Sellers will search for a bid and Asset Managers will wait in the wings. Once that level is established, we will see a snap back rally that will take us to new relative highs. Money flows into equity funds have been strong in recent weeks and there is cash on the sidelines.

After April, inflation, higher interest rates, cautious guidance, 2012 budget talks and credit concerns will weigh on the market. It will be important to set targets and to take profits when the upward momentum slows.

For today, line up your bullish picks. Stocks that have recently broken out and are pulling back to that breakout are great candidates especially if they have been leading the rally. Buy calls as that support holds and use that level as a stop. Out of the top 13 stocks on the Live Update table, 9 conform to this technical pattern. Bring up the charts and see if you can spot the strength. 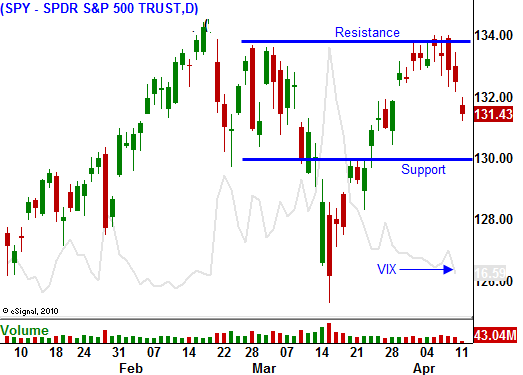