Yesterday, the market pulled back on news that Japan’s nuclear crisis was elevated to level 7. That puts it on par with Chernobyl and it could impact the psyche of Japanese consumers. Officials say that conditions are gradually improving and today the market is staging a small rebound.

The biggest news came this morning when J.P. Morgan posted a 67% increase in net income. The EPS of $1.28 was much greater than the $1.15 analysts were looking for. Healthy investment banking fees and smaller credit card losses pushed profits higher. The reaction was muted and the stock is down $.20. I believe the financial sector will lead the final leg of this rally and I want to see strength in JPM. If I don’t see it, the market will barely get through the highs of the year before pulling back.

Bank of America will post earnings on Friday and the price action in financials is critical. A nice rally across the sector could push the SPY to 140. Tech stocks also need to lead. Google will post its numbers after the close Thursday. I am hearing some whispers about Intel missing its guidance next Tuesday. That would cast a dark cloud over my forecast for a final push higher. Many tech stocks have been pounded and I believe they have room to run.

Stocks typically rally during the first two weeks of earnings season because the strongest companies release early. The price action during the next two weeks will be very telling.

This afternoon, President Obama will outline his plans to balance the budget. The consensus is that he will propose Medicare changes. This is critically important and all politicians need to start embracing this movement. Unfortunately, I believe it will wind up being nothing more than lip service. Politicians are unable to make tough spending cuts. The President will also propose the end of Bush tax cuts for the rich. The market will not like this news.

The reaction will depend on how sincere the President is. If serious steps (like Medicare restructuring) will be taken to curb spending, the tax increases won’t spoil the rally. Our national debt is escalating out of control and this problem needs to be solved.

Traders fear another reserve requirement hike in China. I believe they are spot on. The tightening has been very progressive and the time between each move is short. This tells me that China is trying to get ahead of the curve. Any decline in their economic activity will weigh on global markets, but I feel we are a month away from seeing the effect.

Tomorrow, China will release Q1 GDP. I feel it is still too early to see the impact of tightening and the effect of Japan’s earthquake. The number should be positive and that will bode well for stocks heading into next week.

China has also stated that it will buy Spanish bonds. Portugal will soon be “under wing” and the focus will quickly shift to Spain. It is the 800-pound gorilla in the room and this is where the line in the sand needs to be drawn. It is too big to fail and too big to bail. Having the support of China has eased credit concerns.

Inflation was calculated differently in the 1970’s and using those methods, we would have an annualized rate of 10%. The PPI and CPI will be released this week. The core rate is used by the Fed in their decision-making. It excludes volatile food and energy prices. The conflict in Libya will wage on and unrest in Nigeria could signal a new problem. Oil prices will remain high and they will start to bite into consumption in another month or two.

For today, I am expecting a mildly positive reaction to Obama’s speech. I am going against the grain on this since most analysts believe the Bush tax cuts need to stay in place. I believe that a serious attempt at entitlement reform would be very positive longer term. Will the market believe the President?

The Beige Book will be released this afternoon and it should be positive. Initial claims will also provide strength tomorrow and as long as the PPI core is in line, the market will hold up.

I don’t like the price reversal this morning and stocks are giving back gains. Wait to see how the next few days play out before buying calls. Support at SPY 130 could be tested and we want to see strong buying. I am long calls at a great price since the April leg of my call calendars is expiring. I have staying power and I do not plan on adding to positions. There are some strong stocks at the top of the Live Update table. Line up your bullish candidates and wait for signs of strength. Future rallies need to have follow through. 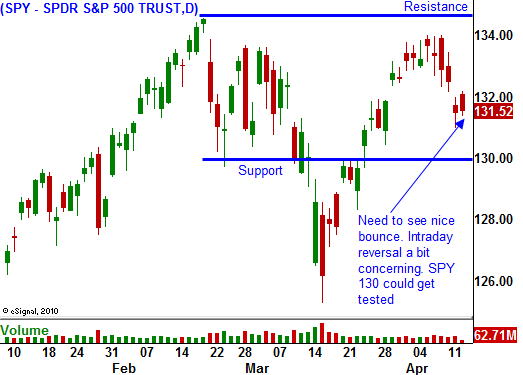