Yesterday, the market rallied early in the day and it looked like buyers were ready to step in after a few days of weakness. By mid-day, stocks had given up most of their gains. This lack of follow-through tells me that the upward momentum is starting to falter.

Alcoa and J.P. Morgan posted decent results, but both stocks are trading lower. If this price action continues, any potential earnings rally will quickly run out of steam. Before the open tomorrow, Google and Bank of America will release their numbers and we will have two more data points to evaluate.

Traders are concerned that Intel might miss its guidance when it posts next Tuesday. The recall and weak computer demand are to blame. IDC reported that global PC shipments were down 3.2% in Q1. A dismal number and cautious guidance from Intel will keep a lid on tech stocks and that sector is critical to an earnings rally. In the next few days the tone will be set.

The economic news this morning was disappointing. Initial jobless claims rose and the core component of PPI climbed (.3% vs. expectations of .2%). Stocks were trading lower before these numbers and they did not have much of an impact.

China will release major economic news this evening and that will set the tone tomorrow. Their CPI leaked out a day early and it was higher than expected (5.3%). I believe Q1 GDP will be decent. China has been tightening like mad and they would not be slamming on the brakes if there were signs of a slowdown.

Japan’s Deputy Finance Minister said that new bonds will have to be issued to help pay for tsunami related reconstruction. Budget cuts will not be enough to cover the $300 billion tab. These offerings will compete with US/EU bond auctions and interest rates will rise.

The EU sovereign debt crisis is starting to heat up. Germany’s Finance Minister said that additional steps would need to be taken in June if an ECB study showed that Greece’s spending is unsustainable. Analysts believe that Greece will have to reduce its debt by 50% if it is going to get on a sustainable economic path. That means massive debt restructuring and losses for investors.

Portugal needs financial aid and this weekend, Finland will vote on the bailout. Reuters reports there is a 50% chance they will block the aid. Fiscally responsible countries are reluctant to finance PIIGS nations that don’t want to cut spending. If they block the bailout, a rift in the EU will be created. Spain has big investments in Portugal and a default could start a chain reaction. The EU has not been able to agree on bailout policies and the central credit facility can’t come online without a consensus. This problem will escalate in coming weeks.

In the US, we have our own debt situation to deal with. President Obama addressed the nation yesterday. His speech attacked the Republican plan, but he did not offer any details on how his plan would reduce deficits. The Bush tax credits will end and defense spending will be cut. Efficiencies in Medicare will save the nation trillions of dollars. Apparently, a centralized database for medical records is all we needed. The government can’t even run the Post Office or Amtrak efficiently, but we are supposed to believe that it can manage national healthcare.

Republicans and Democrats are to blame for our current situation. Social Security/Medicare reform and tax hikes are needed to balance the budget – we won’t get either.

The President spent the first 20 minutes of his speech explaining the enormity of the debt problem and I commend him for that. Americans need to realize the gravity of the situation. He then proceeded to drive a wedge between both parties by attacking the Republican plan with ultimatums.

The market is holding up fairly well this morning considering the news. It is right above support at SPY 130. China’s economic releases will be more important than GOOG and BAC. If all of the news is “market friendly” we might see a nice bounce. If not, support at SPY 130 will fail and the chances for a decent rally will be greatly reduced.

The market could drift a little lower today, but I am not looking for a big move. Traders will wait for the news and then act. As long as SPY 130 holds, I want to buy calls. However, I need to see signs of strength before I commit. Keep your powder dry for now and line up potential longs. 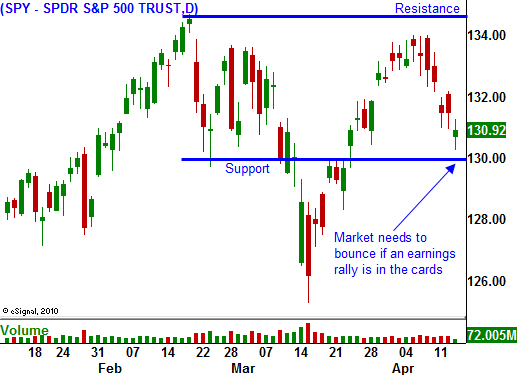