Strong Economic Releases From China Should Provide A Lift. Look For A Rally Next Week.

This morning, the market is stable and support at SPY 130 is holding. As I mentioned yesterday, the economic news from China would be much more important than earnings from Google or Bank of America.

All of China’s releases were better than expected. Q1 GDP rose 9.7%, March industrial production rose 14.8%, March retail sales rose 17.4% and the CPI was in line with expectations. Chinese officials would not be slamming on the brakes if they saw signs of a slowdown. The numbers were strong and the effects of the Japanese earthquake will not be felt for another month. A slowdown in China would be devastating for the market. For now, stocks have a free pass for a few more weeks and the table is set for an earnings rally.

Issues in Europe will fester, but they won’t dampen spirits during the next few weeks. Ireland’s debt rating was lowered two notches to junk. This weekend, Finland could vote to block EU aid to Portugal (50% chance). A vote of “No” would cause a rift in the EU and the risk of a credit crisis would increase. Spain has considerable investments in Portugal and a default could start a chain reaction. I believe Finland will agree to the bailout, but the line in the sand be drawn.

The 2011 budget was passed last night and now the focus will shift to 2012. The President’s speech this week attacked Republicans and he is not “reaching across the aisle”. He ripped apart their proposal but provided few details on his own plan. The danger is that both parties will start battling it out before they raise the debt ceiling. It will be touched around May 16th and this is like playing with dynamite.

Again, these concerns are a few weeks off and major issues have a way of getting resolved at the last minute. This means the focus will clearly be on earnings the next few weeks.

Google posted decent revenues, but the market did not like rising expenses. The stock declined $30 on the news. Bank of America missed earnings estimates, but one-time expenses were to blame. Financials are 0-2 (JPM and BAC) and it doesn’t look like they will lead this rally. That will severely limit the upside potential. Employment has been improving and regional banks could save the day.

Next week, financials and tech will dominate a holiday shortened week. Yesterday, IDC reported computer sales were down 3.2%. From my perspective, most of the bad news is already factored in and any positive comments could ignite a small rally. By the middle of next week, the SPY needs to be trading above 133 if a breakout is going to happen.

The CPI came in as expected this morning. Food and energy spiked, but the core only rose .1%. Inflation is not a concern for the Fed with this low core reading low. However, if food and energy stay elevated for another 2 to 3 months, high prices will bite into discretionary spending. The economic news next week is very light.

As I review all of the earnings that will be released next week, I get a very positive vibe. Solid earnings will get this market back on track and momentum will carry it higher. Search for stocks that are on the brink of a breakout. Go to the top of the Live Update table in the Daily Report (25% off throught Sunday April 17th) and click on the chart links. At least five out of the top 15 stocks are on the verge of breaking out. These will be your best momentum plays. Buy calls and stick with the position as long as the market continues to move higher. When it stalls, take profits.

There are clouds on the horizon and this could be a tough summer. For now, take advantage of this last push higher. 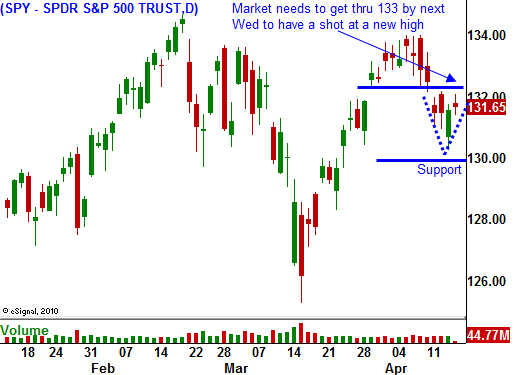