Traders Are Waiting For The Fed’s Press Conference. Stocks Should Push Higher.

This afternoon, the FOMC will release its statement. More importantly, Chairman Bernanke will hold a press conference to outline the Fed’s plan to end quantitative easing. Eventually, loose monetary policies will have to be tightened. QE2 will end, but the Fed has no intentions of raising rates in the near future. Ben Bernanke will describe a fragile economic recovery where inflation is contained and the market will like the rhetoric.

A number of issues will start to weigh on the market in coming weeks and I suggest taking profits on call positions in the next week. We are likely to see short covering as the market breaks out. Bullish speculators will also pile in. Stocks will be “fully priced” and the rally will stall. Profit-taking will set in and the market will reverse in May. Once the SPY 135 breakout fails, bullish speculators will bail on their positions and we will see a swift decline. This will set up a negative tone for the summer.

The storm clouds on the horizon are moving closer. One of the biggest concerns is the debt ceiling. On May 16, our government will run out of money if it has not been raised. Republicans want Democrats to commit to spending cuts in the 2012 budget before they vote to raise the debt ceiling. This is a dangerous maneuver and a brief default would wreak havoc the market. With every passing day this issue will carry more weight.

In the middle of May, EU officials will descend on Athens. Greece is in dire straits and officials want to discuss debt restructuring. This would result in huge losses for European banks. Greece can’t continue to sustain its current deficits and analysts feel that debt restructuring is imminent.

The EU has not defined bailout policies and it needs to move quickly. The banter between strong and weak EU members will escalate during the process and the union will be divided. Portugal is waiting for aid and the longer this drags on for more it will weigh on the market. For now, the looming credit crisis is not a concern. Finland said it will support Portugal’s bailout and Spain’s bond auctions have gone well. This could change in a few weeks when EU officials visit Greece.

In Asia, Japan’s outlook was downgraded by Standard & Poor’s. This was largely expected and it is related to the earthquake. There are concerns that China will tighten again. They have raised reserve requirements and interest rates many times this year. The interval between each action has been very short and I believe we will see more tightening. Any slowdown in China will affect our economy.

Unrest around the world is escalating (Libya, Yemen, Syria, Afghanistan, Cambodia and Nigeria). These conflicts won’t have a direct impact on the market, but they will add to the uncertainty.

This morning, durable goods orders came in better than expected. Tomorrow, Q1 GDP is projected at 1.7% and 390,000 initial jobless claims are expected. Neither of these numbers should be market moving. Next week, major economic releases will be in focus. Initial jobless claims have been creeping higher and we might see nervous trading ahead of the Unemployment Report.

Stocks typically rally into the first few weeks of earnings season. The momentum stalls and the market rolls over. This pattern has been repeated for two years and the timing coincides with the “storm clouds” I referenced above. The price action looks good this morning. Stick with your call positions and be ready to take profits.

I believe the Fed’s statement and Bernanke’s press conference will go well and the market will push higher. Set stops and start scaling out of long positions this Friday. By the end of next week your long positions should be small. I like selling into strength.

When the upward momentum slows, I will start selling out of the money call credit spreads in May. 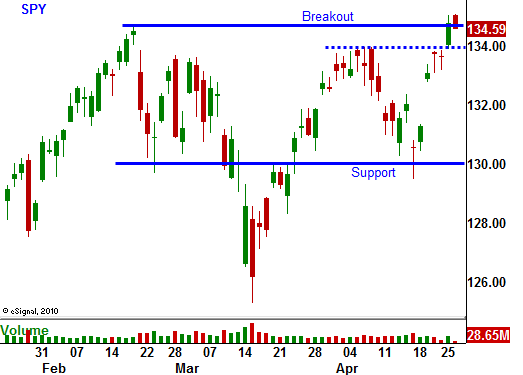