Final Stage Of The Rally – Attend Next Week’s Webinar – Free

In the last week, stocks have surged to a new high on strong earnings reports. One third of the S&P 500 has reported and 72% of the earnings have exceeded estimates. Companies have been able to beat revenue forecasts by about the same margin. Tech stocks made a new 10-year high yesterday and they are leading the charge.

As I have been pointing out, stocks will rally as long as earnings are the focus. From a valuation standpoint, they are cheap and the S&P 500 is trading at a forward P/E of 13. Interest rates are low and equities are the best investment alternative. You’re likely to see more short covering and bullish speculation over the next few days. End of month/beginning of the month fund buying will also push stocks higher.

We have been buying calls ahead of earnings season and we have captured this entire move. There is still a little more upside, but it would be prudent to start taking some chips off of the table. Start scaling out of bullish positions tomorrow and try to have a low level of exposure by the end of next week.

With each passing day, the focus will shift from earnings to macro issues. The debt ceiling, economic releases, credit concerns in Europe and tightening in China are a concern.

Yesterday, Ben Bernanke held a press conference to outline the Fed’s intentions. QE2 will end, but they believe the economic recovery is fragile. Inflation is not a concern and interest rates will remain at current levels for an extended period of time. The market liked the rhetoric.

By May 16th, our country will hit the debt ceiling. Republicans say they will not approve an increase unless spending cuts for the 2012 budget are guaranteed. They are playing with dynamite and a temporary default would wreak havoc on our market. The tension will grow with each passing day. This won’t be an issue next week, but it will weigh on the market in two weeks if it is unresolved.

This morning, Q1 GDP came in as expected at 1.7%. It did not impact the market. However, initial claims rose to 429,000 and it could be a problem next week. This is the third week in a row that initial jobless claims have increased and that does not bode well for next week’s Unemployment Report. Jobs are the cornerstone to a sustained economic recovery. I expect to see profit-taking ahead of next week’s release. ISM manufacturing and ISM services are near record highs and a pullback is likely. This could also spark profit-taking.

The EU will descend on Athens in two weeks. Analysts believe Greece will have to restructure its debt and EU officials want to discuss a plan. Current deficits are unsustainable and Greek bond yields have spiked. Plans for Portugal’s bailout have been drafted and they will be presented next week. The policies for future bailouts have not been determined and this is critical for the new EU credit facility. The banter between strong and weak members will create a rift. Finland has agreed to fund Portugal’s bailout, but their reluctance shows how one minor member can affect the entire union. These issues will ignite credit concerns in the next few weeks.

China is slamming on the brakes with both feet “Fred Flintstone style” and another round of tightening is expected. They are considering capital gains taxes, revaluing the Yuan (+10%) and a rate hike. The actions this year have been aggressive and the intervals are frequent. This leads me to believe that they are still in the middle of the process. Stocks in China are down for the fifth straight day. They are committed and they will contain growth. Any slowdown in China will impact our economy.

Stocks typically rally into the first few weeks of earnings. Good news gets priced in and the momentum stalls. By the middle of earnings season, stocks have a tendency to roll over. This pattern has repeated itself for the last eight quarters.

The timing for all of these events suggests that we are in the final stages of this rally. Shorts are covering and bullish speculators are piling in. Optimism is running high and the VIX has not been this low since October 2007. In the next week, the momentum will stall and the focus will shift from earnings to the issues mentioned above. The breakout at SPY 135 will fail and bullish speculators will have the door slammed in their faces. Profit taking will set in as uncertainty creeps in. “Johnny come lately” will bail on his call positions and this round of selling will be swift. This will set a negative tone heading into a traditionally weak period of the year for stocks (sell in May and go away). We want to get ahead of this curve.

Ride your profits and scale out of call positions over the next week. We want to sell into this strength. I am starting to line up out of the money call credit spreads. I want to sell them when the upward momentum slows. I also plan to use the proceeds to buy June out of the money puts. This entry point is still a week away. For now, manage profits.

The price action should be positive through Tuesday. 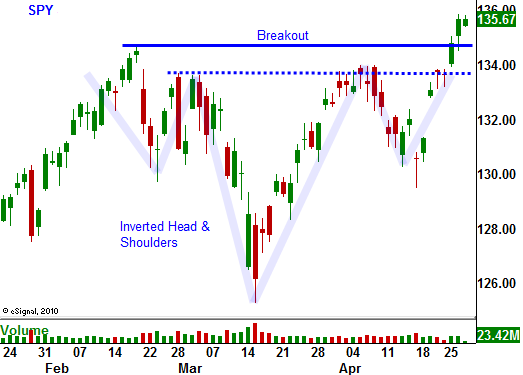