This has been a great week for the market. Stocks have climbed to new multi-year highs on strong earnings. More than half of the S&P 500 companies have posted results and profits are up 25% year-over-year. Almost three quarters of the releases have beaten estimates on the top and bottom line.

Equities are undervalued and they trade at a “cheap” forward P/E of 13. Bond yields are low and money has been rotating into stocks. There are only two things that could spoil this rally. The first is a credit crisis in the second is a slowdown in China.

Debt levels are high in Japan, the EU and the US. The problem could surface in any of these regions and the heat will get turned up in Europe and the US in coming weeks. Greece is on the ropes and EU officials are meeting in a week to discuss debt restructuring. Portugal will receive their bailout conditions next week and we will gauge the reaction. The EU has not been able to reach an agreement on bailout policies and it can’t ramp up its new credit facility until that happens. The banter between countries will escalate and that will spark fear.

In the US, we will hit the debt ceiling in two weeks. Democrats and Republicans are using this as leverage to secure budget cuts for 2012. They are playing with dynamite and the market will get nervous if it is not raised soon. A huge one day market selloff might be needed to send the message. When that happens, they will raise the debt ceiling.

China will celebrate a holiday this weekend. They have traditionally used this as an opportunity to tighten and many analysts feel that we could see action taken next week. The preliminary PMI number was released and it was unchanged. That strength is good news in the short run, but it increases the chances for tightening. They are considering another rate hike, Yuan revaluation (+10%) and capital gains taxes. The bottom line is that they have moved swiftly and the intervals are frequent. This means they are serious and they are nowhere near finished. Any slowdown in China will impact the rest of the world.

The focus will shift from earnings to economics next week. ISM manufacturing and ISM services will be released. Both numbers are at historical highs and a pullback is likely. Both numbers will still be strong, but the market might not like the topping action. Initial jobless claims have increased the last three weeks and we could see nervous trading ahead of Friday’s Unemployment Report. Jobs are the key to sustained economic growth.

Stocks have a tendency to rally into the first few weeks of earnings season, stall and then reverse. I believe this pattern will repeat and you should start scaling out of call positions today. I suggest reducing your positions by 15% each day. By next Thursday, your long exposure should be down by 75%. My plan is to sell into strength.

If the breakout at SPY 135 fails, I will quickly exit all call positions. I have nice profits and I don’t want to see them slip away.

By the end of next week, I could be selling out of the money call credit spreads. I will use the proceeds to buy out of the money puts in June. I will wait for a breakdown below SPY 135 before I start entering put positions.

The overnight earnings were good and end of month/beginning of the month fund buying should propel the market. The first two days next week should also be positive. Ride the final wave of this rally, but start taking profits. 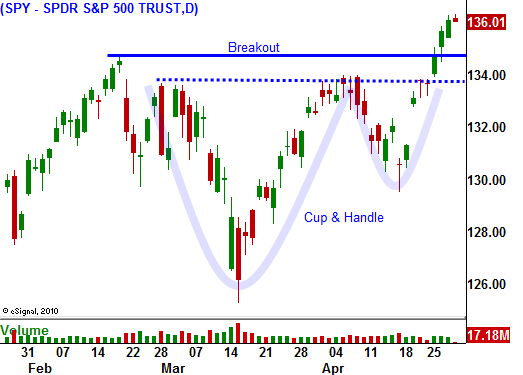